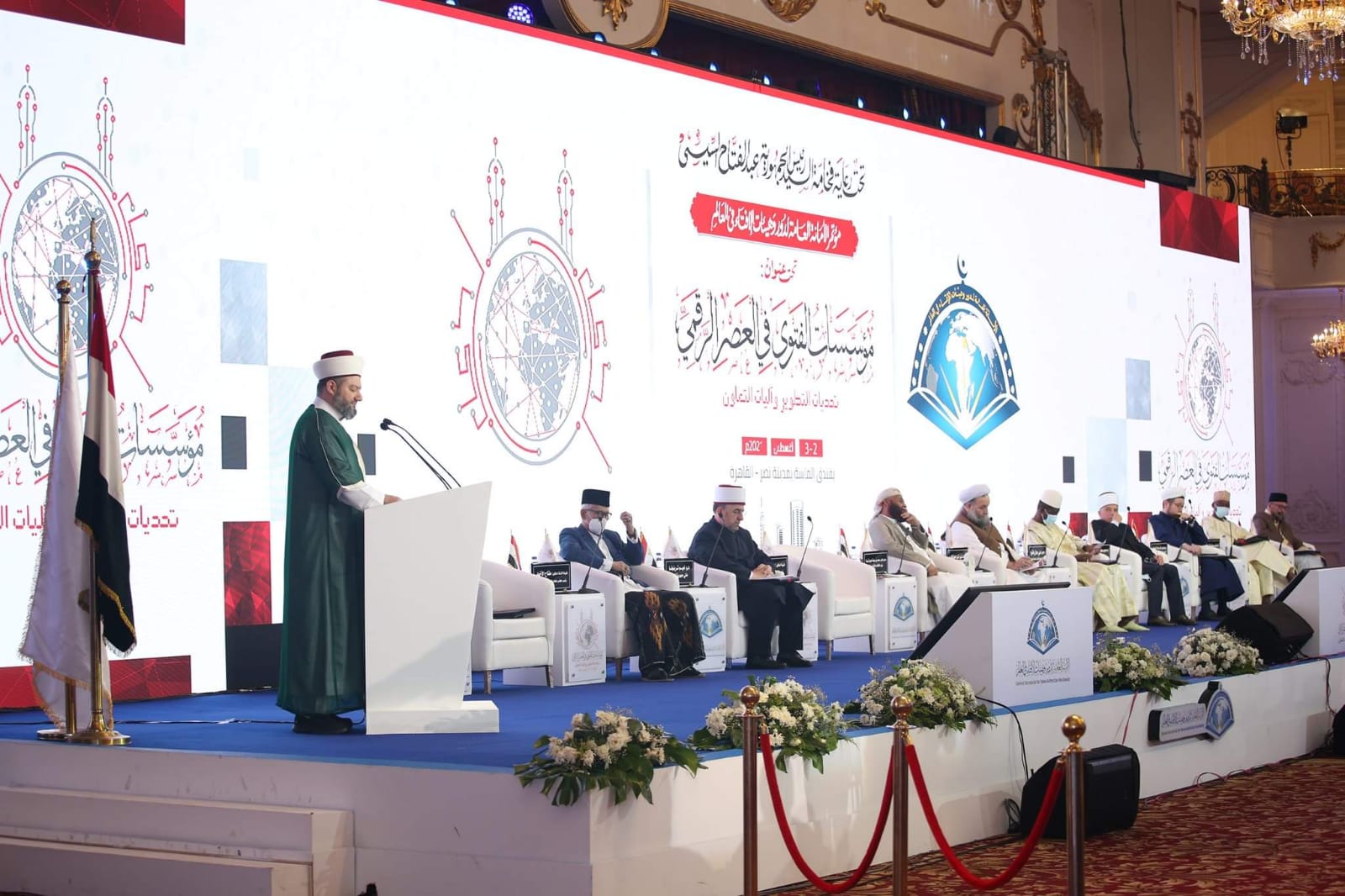 His Eminence Prof. Sheikh Salim Alwan, Chairman of Darulfatwa-the High Islamic Council of Australia participated in the sixth International Conference of The Secretary-General of the General Secretariat for Fatwa Authorities Worldwide by special invitation from the Grand Mufti of Egypt, His Excellency, Shawqi Ibrahim ^Alam.

The Conference entitled, “Fatwa Authorities in the Digital Age- the Challenges of Innovation and the Tools of Collaboration”, was held under the umbrella of Egypt’s Dar al-Ifta in Cairo on 2-3 August 2021/23-24 Dhul Hijjah, under the patronage of His Excellency Abdel Fattah, el-Sisi, the President of Egypt.

During the Conference, Sheikh Salim Alwan was invited to deliver a speech in which he discussed the important role of the digital age and the activities of spreading Islam and curtailing radicalism.

He also explained how Darulfatwa-the high Islamic Council of Australia took advantage of government health restrictions during lockdowns caused by the spread of COVID-19 to conduct numerous religious sessions via the Zoom application with a global audience.

The Conference included a discussion forum, in which Sheikh Salim was also a prominent participant and speaker.

After the daily programs, in his capacity as the highest representative of moderate Muslims in Australia under the High Islamic Council-Darulfatwa, Sheikh Salim Alwan engaged in side-talks with prominent participants of the Conference and Muftis who congregated from around the world.

His Eminence also visited several prominent figures in the world of Islam in Egypt and exchanged valuable and beneficial Islamic literature, books, and trophies of remembrance to mark the visit and the occasion.

Monday 2 August, 2021 – A Gracious Exchange Between His Eminence and the Minister of Al-Awqaf of Egypt

His Eminence Dr. Sheikh Salim Alwan paid a goodwill visit to His Excellency Dr. Mohammed Mukhtar Gomaa, Minister of Religious Endowments in the Arab Republic of Egypt on Monday, August 2, 2021 at the Headquarters of the Supreme Council for Islamic Affairs in Cairo.

During the meeting, Dr. Sheikh Salim Alwan praised the efforts of the Ministry of Religious Endowments in spreading the true religion, the tolerance of Islam and its moderation, and its constant pursuit of civilized interactions, through its envoys and delegates and its publications translated into various foreign languages.

During the meeting, the Minister of Awqaf, Dr. Mohktar Gomaa presented a precious gift to Dr. Salim Alwan, Chairman of Darulfatwa Australia in recognition of the efforts of The High Islamic Council of Australia. 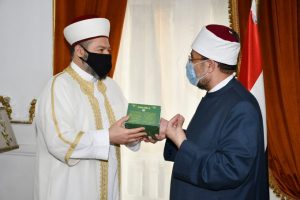 Chairman of Darulfatwa Australia visits Vice President of Al-Azhar Mr. Osama Yassin, at its headquarters in Cairo and met with the Al-Azhar Alumni World Organization. Following their discussion on how to utilize the tools of the digital age to save Muslim youth from being recruited by radicals,
His Eminence presented the Hon. Mr. Osama Yassin with the latest publication of the age-old book ‘Al-Adab Al-Mufrad’ recently annotated by Darulfatwa Australia Chairman and a league of eminent Azhar sheikhs. 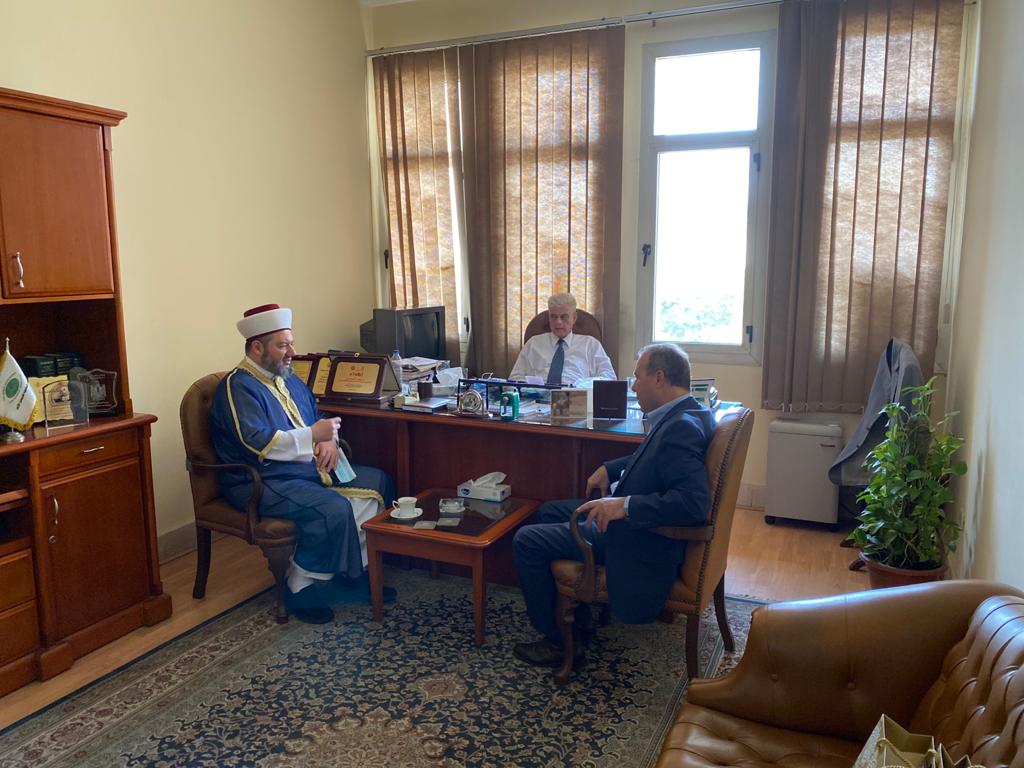 Tuesday August 3, 2021 – His Eminence with the President of the Council of Scholars of Indonesia

His Eminence, Darulfatwa Chairman with Sheikh Miftah al-Awsal, President of the Council of Scholars of Indonesia, and Dr. Ali Bahr at the Dar-ul-Ifta Conference entitled, “Fatwa Authorities in the Digital Age- the Challenges of Innovation and the Tools of Collaboration”. 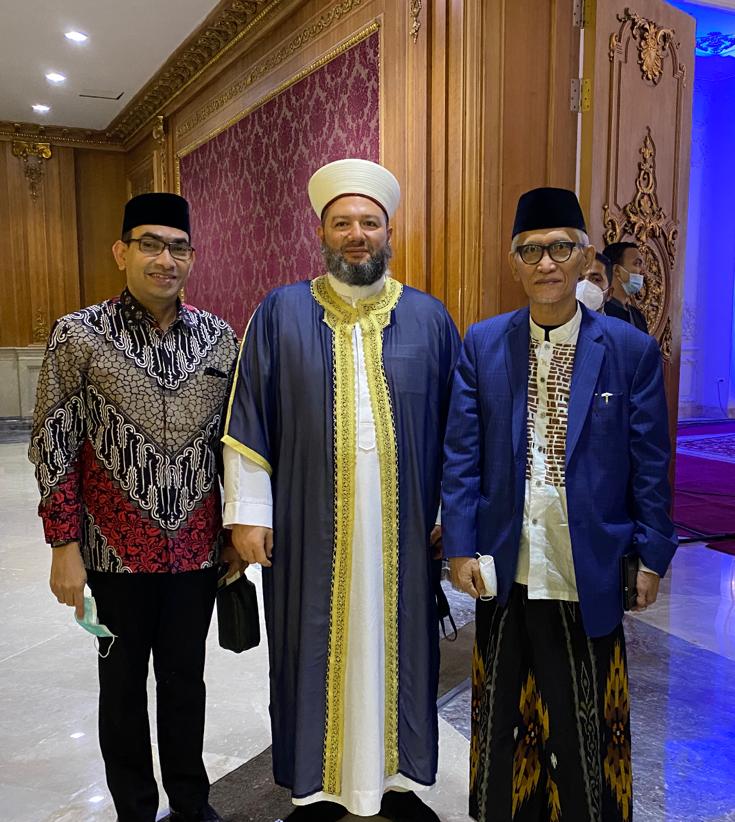 Tuesday 3 August, 2021 – His Eminence with Zamir Rakiev Mufti of Kyrgyzstan

Sheikh Salim Alwan, Darulfatwa Australia Chairman discusses the role of Muftis in a digital age and the utilization of new technologies to fulfil their role. 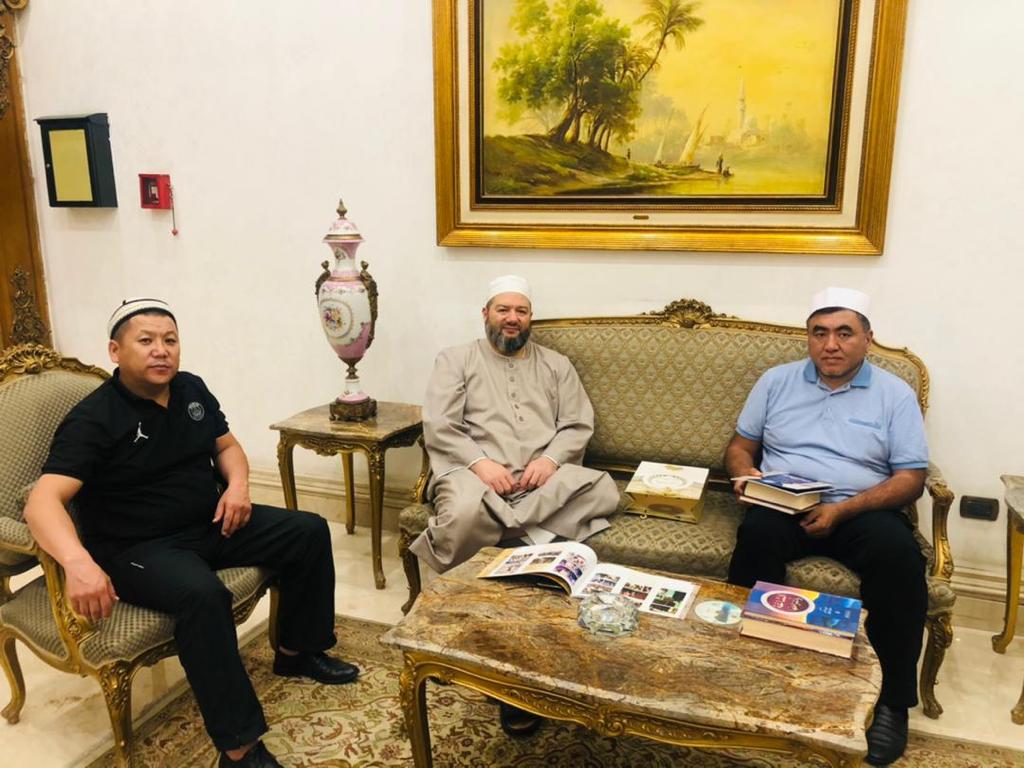 Wednesday 4 August, 2021 – His Eminence joins the Director of the Board of Elite Scholars

Sheikh Salim Alwan with the Director of the Board of Elite Scholars, Sheikh Mahmoud Sedki Al- Hawari. Following talks on how to embrace the digital age to reach out to Muslims and issue appropriate fatwas (edicts), Sheikh Mohammad Al-Hawari expressed his delight in receiving the latest issue of Al-Adab Al-Mufrad, annotated by His Eminence. 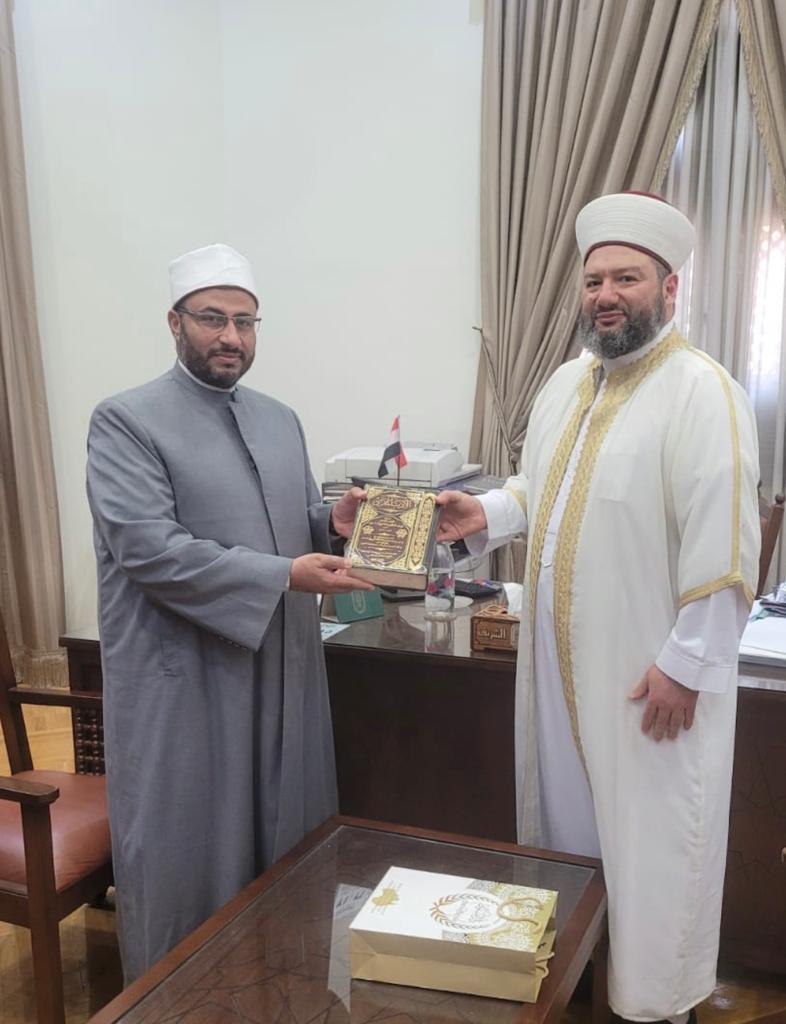 The President of Al-Azhar University praised the participation of the Chairman of Darulfatwa Australia at the Conference which aimed to congregate fatwa authorities worldwide and was held on the 2nd and 3rd of August 2021.

Dr. Al-Muharsawi, praised His Eminence Dr. Sheikh Salim Alwan on his efforts and determinations in spreading the values and concepts of moderation advocated by our religion, representing the Muslim community in Australia.

At the end of the meeting, His Eminence Dr. Salim Alwan, presented some of Darulfatwa’s publications and books, including a rare copy of the newly released ‘Al-Adab Al-Mufrad’ which was recently annotated by His Eminence Dr. Sheikh Salim Alwan al-Husseini. Commemorative photos followed. 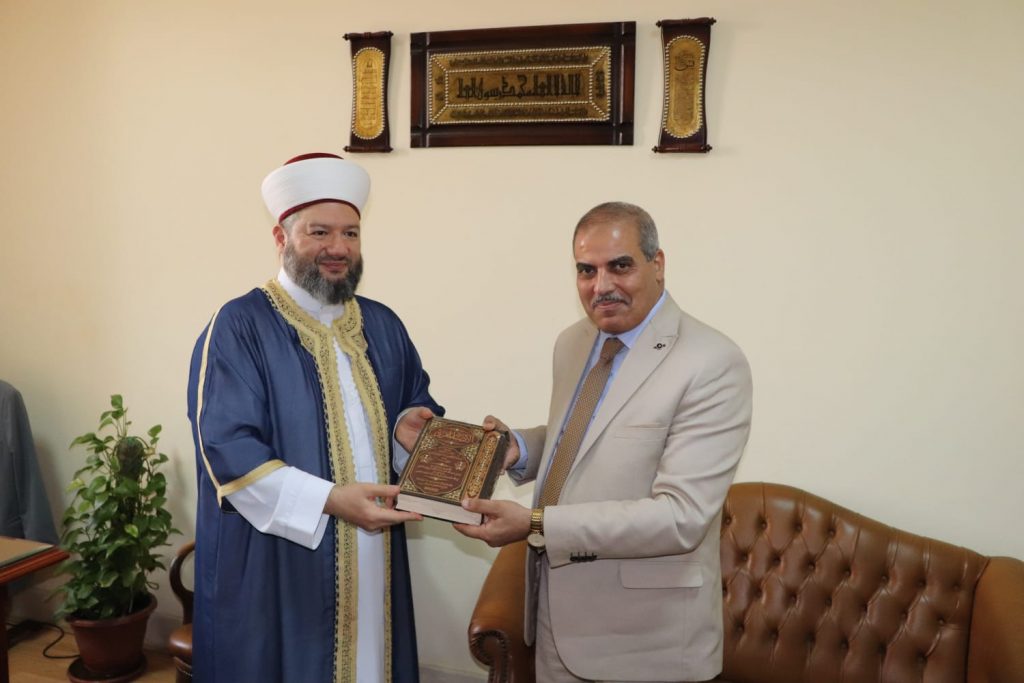 “We are keen to have an extension with every intellectual and intermediate approach, to convey the correct message of Islam, pointing out that al-Azhar received this year 533 students from the Muslim community in Australia at different stages of education, from kindergarten to graduate studies, and this number shows the keenness and great confidence of the Muslim community in Australia to receive religious sciences and the Azhari curriculum”.

“Our fear for our children and future generations of the Australian Muslim community has kept us adhering to the approach of Al-Azhari, which is the approach of moderation and calls for peace, love and nation-building”.

He added, “Al-Azhar works to protect the children of Muslims from extremism, and protects them from extremism and deviation, thanks to this enlightened middle path approach, and this is the secret of its survival for more than a thousand years”. 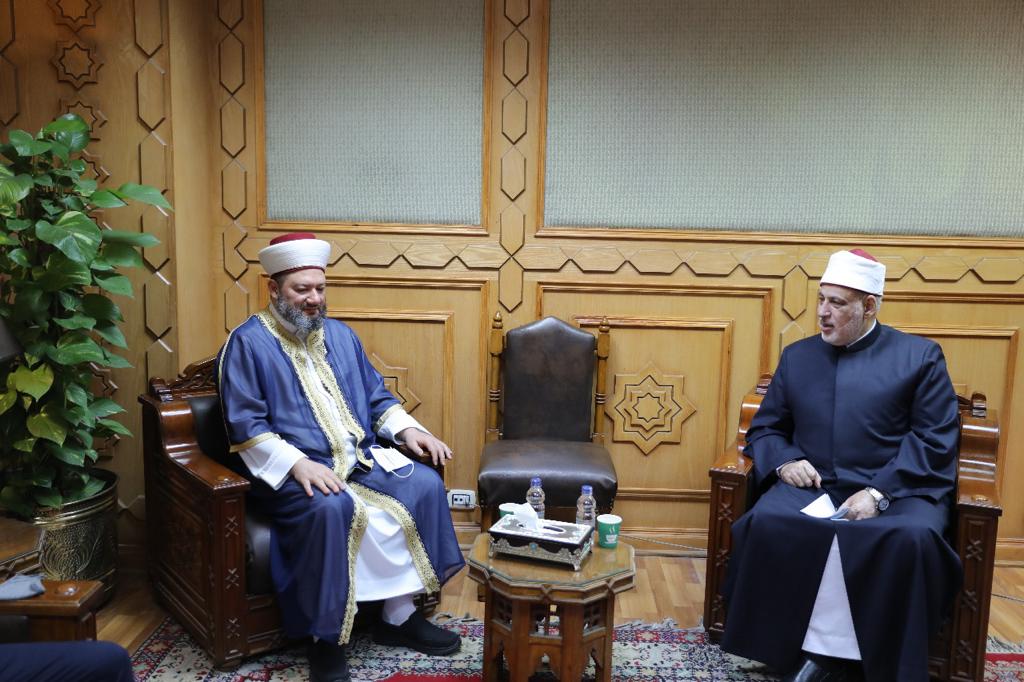 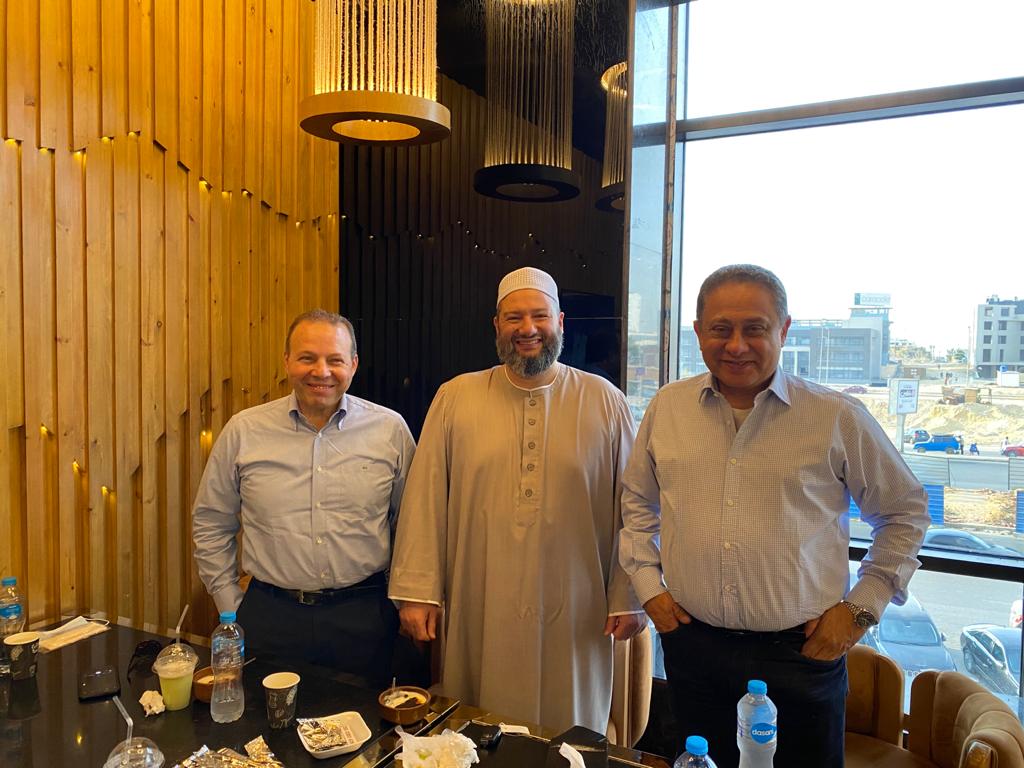 At the Conference: His Eminence, Chairman of Darulfatwa with the Secretary-General of the World Council of Muslim Communities Dr. Mohamed El, Bishari

Sheikh Salim Alwan with the Secretary-General of the World Council of Muslim Communities Dr. Mohamed El, Bishari and Former Deputy Grand Mufti of Greece Dr. Yasar Al-Sharif and guests at the Conference for Fatwa Authorities entitled “Fatwa Authorities in the Digital Age – the challenges of innovation and the tools of collaboration”. 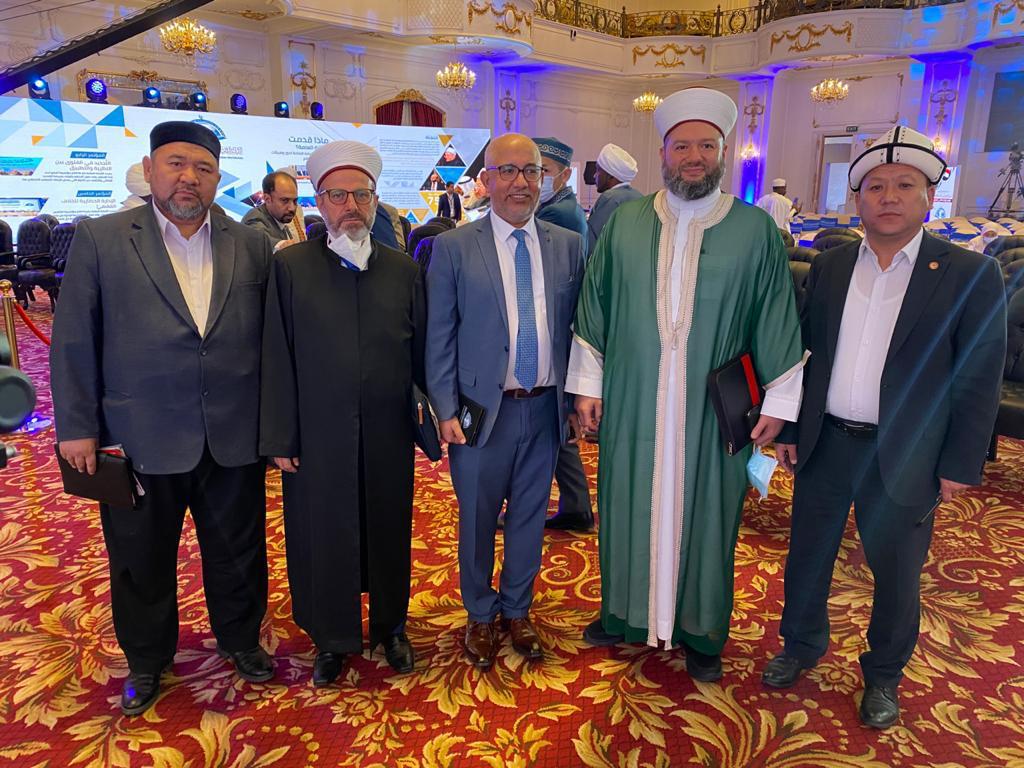 At the Conference: His Eminence with Sheikh Abdul Karim Al-Khasawinah, Mufti of Jordan

Sheikh Salim Alwan with Sheikh Abdul Karim Al-Khasawinah, Mufti of Jordanand Mufti Aziz Hassanovic of Croatia at the Conference for Fatwa Authorities entitled “Fatwa Authorities in the Digital Age – the challenges of innovation and the tools of collaboration”. 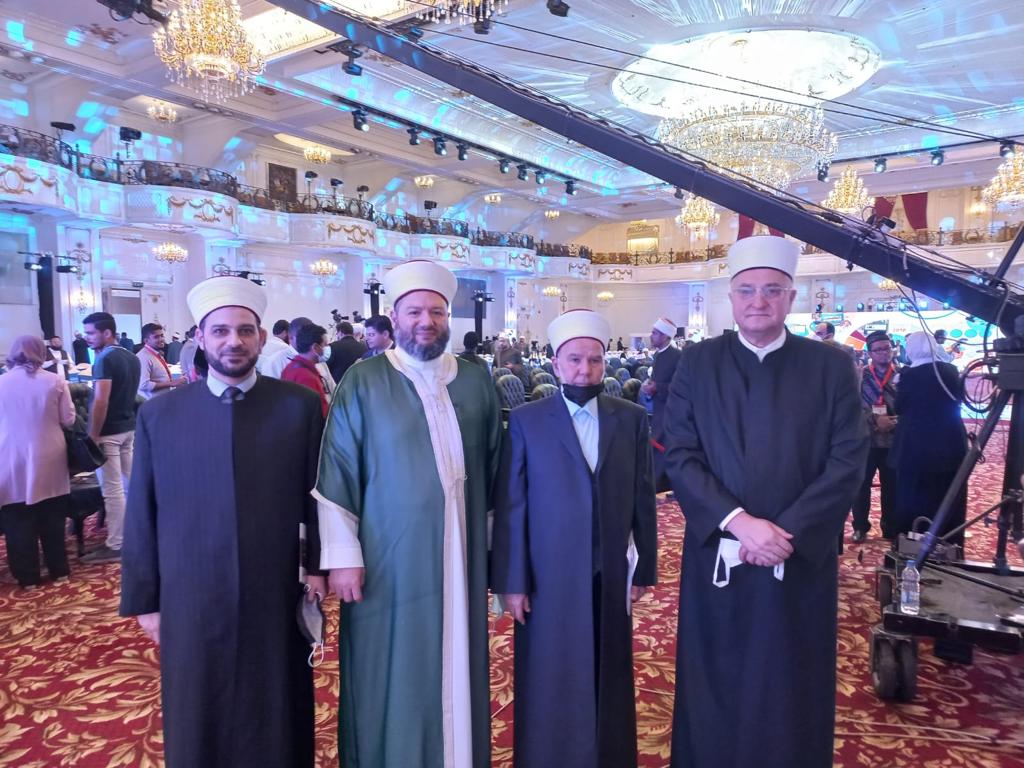 At the Conference: His Eminence with the Mugti of Belgrade, Serbia

In side-talks at the Conference, His Eminence continues to discuss how to utilize the digital age to amplify the call of moderation in Islam on all social media platforms with the Mufti of Belgrade in Serbia, Sheikh Mustapha Yusuf Spanovic.

Thursday 5 August, 2021 – A Courteous Visit to the Australian Embassy in Egypt

The Conference participants consisted of more than 85 bodies from around the world, including Dr. Sheikh Salim Alwan representing Australia.

During the visit to the Embassy, the officials discussed community interests relating to moderation and the middle path and further crystalized the communique of moderation in the digital age.

His Eminence expressed how precious this topic is to him and that he delivers it to government officials on all levels in Australia, as well as at international forums, on behalf of Australian Muslims. Commemorative photographs were taken at the end of the meeting. 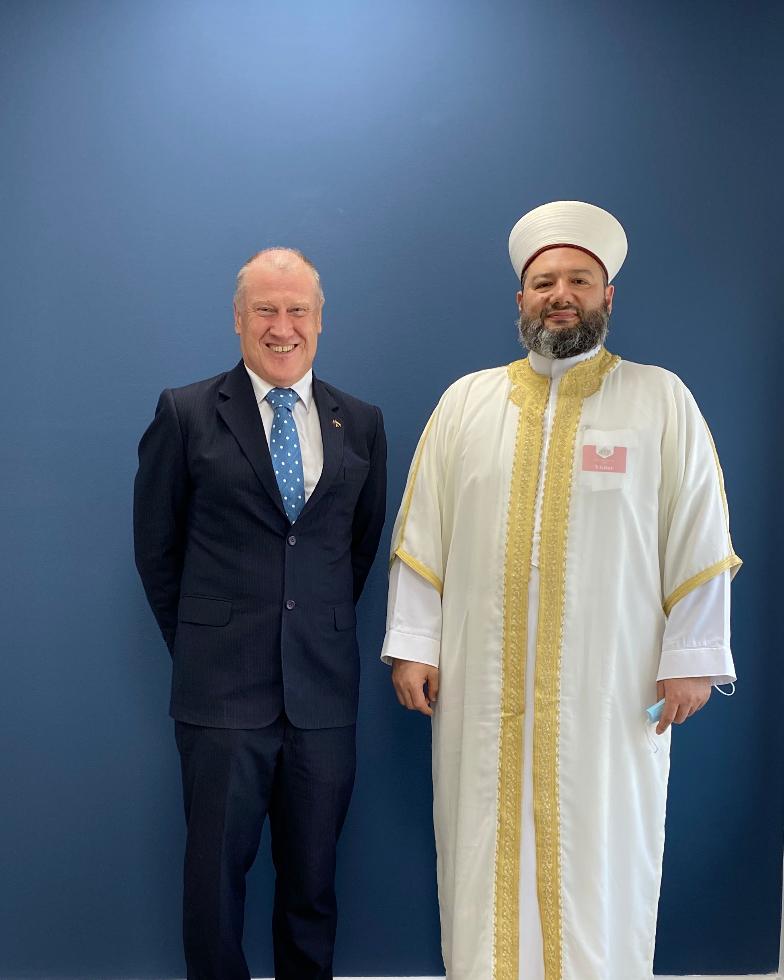 During the Conference program, several media organization journalists interviewed His Eminence as he reflected on the important role of the digital age in spreading Islam on social media and the virtual world online.

Condolences on the Losses of the Fuel Tank Explosion in Akkar