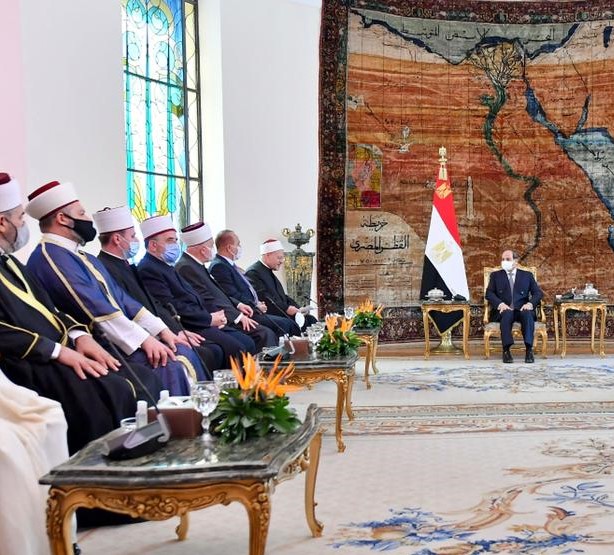 On August 2, 2021, the Egyptian President, Mr Abdel Fattah El Sisi receives His Eminence Prof, Sheikh Salim Alwan among the league of authorised Muftis who arrived at Cairo to participate in the 6th International Conference of the General Secretariat for Fatwa Authorities Worldwide in Cairo, Egypt.

President Abdul Fattah Al-Sisi hosted the delegation participating in the Sixth International Conference of The Secretary-General of the General Secretariat for Fatwa Authorities Worldwide, entitled “Fatwa Authorities in the Digital Age”, in the presence of Dr Shawqi Allam, Grand Mufti of Egypt.

The President received the scholars of religion who participated in the Conference due to the important role they hold in the office of Fatwas in the Islamic world, and it being a lawful reference for issuing religious fatwas (edicts) in all aspects of life, dealings, and acts of worship.

Such contributes to spreading awareness and true and realistic understanding of the religion, establishing societal stability, and dealing with issues facing misleading fatwas as a result of the interference of non-specialists.

The President expressed the importance of fatwa authorities staying on track with the great developments that this field has experienced, especially with the popularity of social media and standing up against electronic platforms that spread incorrect thoughts, disrupting the true essence of the religion of Islam.

Dr Shawqi Allam also expressed his gratitude and that of all participants to the President for his kind hosting of the conference, noting that the purpose of this year’s assembly is to increase the awareness regarding the importance of digitalization, its impact on fatwa authorities, and its role in societies.

He also pointed out the requirement for fatwa authorities to continue to develop technologically and to remain up to date with the digital age. 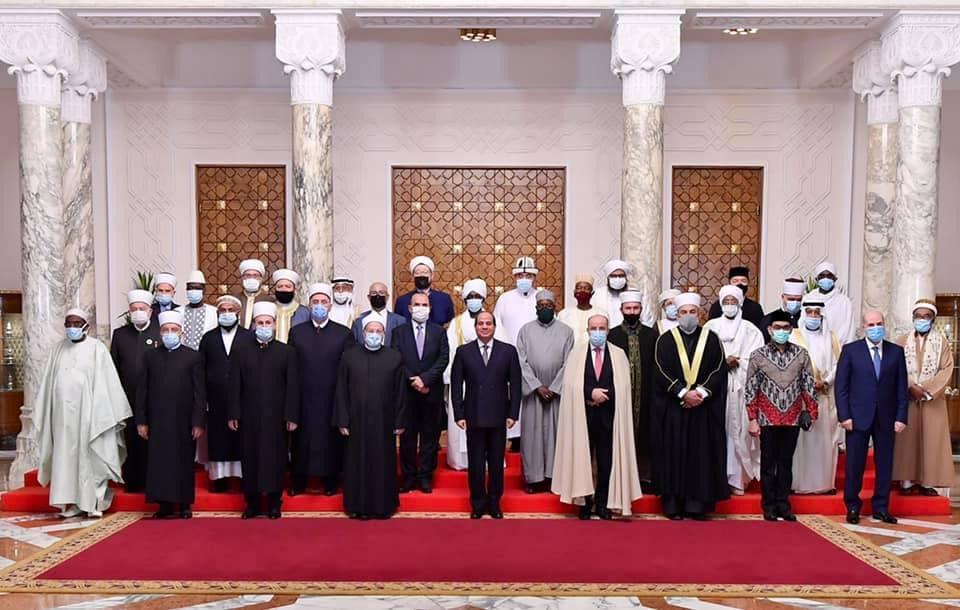 On the same note, he elaborated on the relevant efforts made by the Egyptian Dar Al-Iftaa’. He noted that throughout the year 2020 it issued approximately 1,300,000 fatwas in a variety of cases and topics, among which close to 1,000,000 fatwas were issued through the website and the first fatwa observatory of its kind in the world.

The Conference participants observed an open discussion between the President and the participants, who praised the President’s wise policy in establishing and spreading the noble values of forgivingness and freedom of choice.

Additionally, they commended the President on his constructiveness, development, and collaboration which solidifies Egypt’s position as a beacon of the middle ground and moderation in both the Arab and Islamic world, and the world.

The official speaker added that the assembly tackled the importance of rectifying religious speech at the level of individuals, groups, and nations.

To that, the President commented about the responsibility and important role undertaken by the pure religious authorities in Egypt, represented by Dar al-Iftaa’, Al-Azhar Ash-Sharif, and the Department of Awqaf.

He reiterated the utmost importance of this cause is to clear the religious rhetoric from any and all misconceptions, misguidance and incorrect thoughts wrongly attached to it.

He said this is a crucial mission requiring the joint effort of all religious scholars of ifta’, imams, and preachers to fight against misguided rhetoric that is aimed at tarnishing the image of Islam and affect the pillars of the creed. He commented [such evil crusades] call for exploiting religion for political purposes through acts of extremism and terrorism.