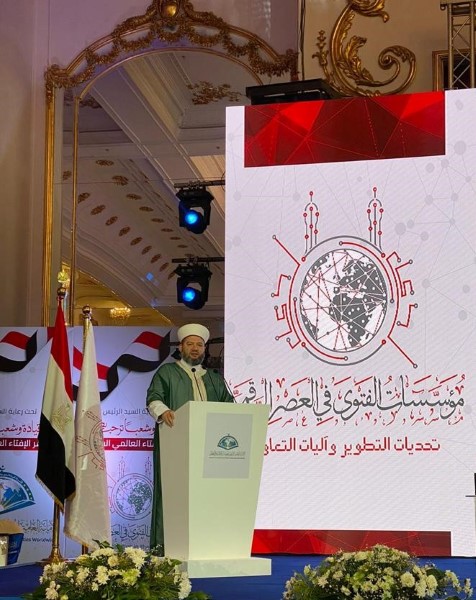 By special invitation from the Grand Mufti of Egypt, His Excellency, Shawqi Ibrahim ^Alam, His Eminence Prof. Sheikh Salim Alwan, Chairman of Darulfatwa-the High Islamic Council of Australia participate in the sixth International Conference of The Secretary-General of the General Secretariat for Fatwa Authorities Worldwide.

The Conference title, ‘Fatwa Authorities in the Digital Age’ was held under the umbrella of Egypt’s Dar al-Ifta in Cairo on 2-3 August 2021/23-24 Dhul Hijjah, under the patronage of His Excellency Abdel Fattah, el-Sisi, the President of Egypt. Participants included honourable ministers, muftis, ambassadors, scholars, statemen, journalists, and media figures.

Dr Ibrahim Negm, Senior Advisor to Egypt’s Mufti and Secretary-General of the General Secretariat for Fatwa Authorities Worldwide pointed out that the conference sessions, discussions, workshops, and contributed research revolved around the digital transformation of fatwa authorities and its importance, with particular focus on analysing the issues relating to ushering fatwa authorities into the digital age and the challenges of digital application.

“A number of important initiatives have been launched that can be defined as a quantitative step towards digital transformation in fatwa authorities in light of developing mechanisms of inter-collaboration especially when it comes to addressing pandemics and crises”, Dr Negm said.

Transcript of Arabic Speech below

Praise to Allah again and again, and may Allah raise the rank of our dear Master of the first and the last Prophets, our leader Muhammad and on all his brothers in prophethood and messengers and on his wives and daughters and companions and all who followed in beneficence to the day of judgement.

which means: Collaborate in benevolence and acts of obedience and do not collaborate on sinful acts and aggression.

Ladies and gentlemen of the audience, each called upon by the good of his name and the kindness of his traits.

As is well-known to you, no era is free of epidemics and diseases that vary in form and method of spreading, and nations also differ in their methods of facing them. But the Islamic approach contains definitive dialogue in its approach to affairs and issues of all aspects of life.

This is due to two reasons, one of which is because it relies on the two references by revelation – the Qur’aan and Sunnah, and the other is its general principle of referring matters to those who are specialists and qualified to in handling them.

This means: Ask people of credible know-how if you do not know. 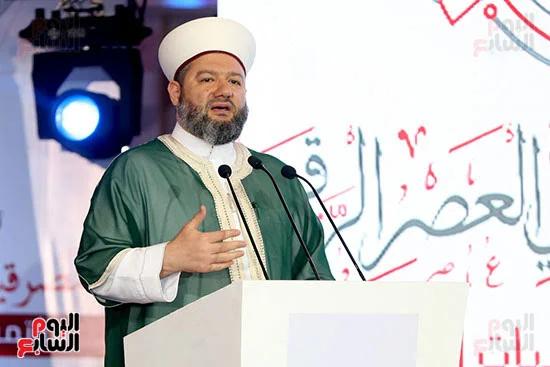 The world now is living in harsh circumstances that touch the heart as a result of the widespread of COVID-19. This calls on everyone to combine all efforts to face this obstinate virus; each as per his/her own areas of expertise and qualifications.

For medical practitioners, it is to treat patients from illnesses and aches and to attempt to find medicine and treatment for it. For government officials, it translates to using their powers to limit the spread of this disease and put in place preventative measures.

As for the ordinary citizen in society, he/she should adhere to such measures of precaution. The scholars of religion are also involved in this encounter.

For, they are equipped with the responsibility of issuing credible fatwas in response to the situations of people and directing precautionary measures to diffuse the spread of this virus.

The health and wellbeing of the body are among the virtues that Allaah has endowed upon us. Thus, we should seek to preserve it by applying precautious health measures.

Indeed, an ounce of prevention is worth more than a pound of cure. One of the most important measures is hygiene and cleanliness, Allaah the Exalted included the matter of making ablution (wudu’) as part of our religion, which is a valuable method in the importance of hygiene.

It is also a beneficial act of washing the hands before and after eating, washing hands directly before and after self-hugeine (istinja’), and other health benefits that were brought upon us from within the Sharia.

Prophet Muhammad peace be upon him used to cover his face with his hand or attire when he sneezed, teaching his nation of appropriate Islamic conduct.

As for the meaning of the Prophet’s saying: “There exists no contagion”, it refers to the understanding of the people during the time of the dark era (al-Jahiliya).

During that time, the people understood that the act of being contagious was not attributed to Allaah in the sense of being His creation. Though indeed, if Allah Wills, He can make the contact of the uninfected with the infected, a cause for infection of the former.

This is why the Prophet also said: “Run away from the leprous as you would from a lion”, and “no musih is to pass by a non-musih”, all of which happens in accordance to the destining of Allah. And a “musih” is one whose cattle is free from diseases and deformities.

Meaning, he must not let his ill camels pass by healthy ones and let the former drink along with the latter. All such is the behaviour that reflects taking the causes into consideration. Hence, behaving in accordance with causes does not defy reliance on Allah.

Behaving in accordance with causes is not contrary to the firm belief that Allah is the Creator of everything, and that the disease does not [inherently] infect. Rather, Allah creates harm by His will.

Ladies and gentlemen: Well known to all are the health, economic, social, political, and other crises that befell countries and nations by the spread of COVID-19.

Religious institutions of reference, among which is Darulfatwa Australia, in addition to governments and concerned departments of health, had a clear and transparent stance with the national officials, in administering necessary health and preventative measures to limit the spread of this virus.

Taking the above-mentioned measures has not stopped us from moving forward in spreading the call and knowledge of Islam.

We have found in digital technology and social media platforms a window to the community that allows us to deliver messages of awareness and guidance, and channels that enable us to urge people to abide by the applicable laws during these difficult times, to limit the increase of COVID-19 cases.

As well, Darulfatwa Australia was the precedent in utilizing this modern technology to broadcast religious lessons and guidance daily on social media platforms.

We collaborated with religious institutions in Southeast Asia and hosted daily online religious sessions and courses. The sessions included readings of the Hadith with reference to the chain of narrators, relaying books of jurisprudence and creed.

This was all via the Zoom application which attracted a presence of over 2000 participants and was later amplified via Facebook, Youtube and other platforms.

We adhered to the principle of cooperating in righteousness and piety and encouraged the exchange of counselling and advice among one another as we upheld the Thikr of Allah with fine preaching.

Furthermore, Darulfatwa Australia continues to give the fatwas that people need in light of this disease. Darulfatwa also handed out food aid for those adversely impacted by the economic recession.

Sociologists spoke of this evolution and went on to study its impacts on the standing structures of religious institutes as references. Islamic moral guidance and direction is considered one of the most important traits facilitated by the internet.

In all honesty, we consider the internet with all its variants of NBN or other, as a great opportunity for the Mufti and the seeker of a fatwa. We should not ignore or hesitate to use this facility.

And as I stand here on the podium of the Daru-ul-Ifta, I address all those of moderation, all those of the middle path and the path of righteousness when I urge, do not neglect the benefits of the internet.

Fill the virtual world with beneficial information and guidance and the Muhamadian methodology which is based on the Book of Allah and the Sunnah of the Prophet. Defend moderation and the middle path and be a cause for the youth to be saved from radical ideologies and for the protection of nations. If we do not rush to this great deed, the radicals will beat us to it.

They are the same ones who have caused people to repel from Islam.

Those who weren’t Muslim in the first, were disgusted by the wrong image of Islam portrayed by those radicals, and those who were Muslim by birth, soon turned away from the true teachings of Islam, believing the misguidance of the radicals, and other yet landed in the laps of atheism.

Those radicals even hunted down some youth and recruited them by manipulation, becoming their victims. Hence, the internet cannot be left for the radicals to utilize it as their tool.

We call on the people of the middle path, of moderation and of credibility of Ahlussunah wal Jama^ah to fill this virtual space with goodness and virtuous guidance.

In the end, we ask Allah the Exalted to grant us the ability to achieve what is good and beneficial.

I thank you once again, your Excellency, the Grand Mufti, for this gracious invitation and the same to the Secretary-General of Dar-ul-Ifta and to you all. With a special thank you to the Egyptian President, his Excellency Abdul-Fattah Al-Sisi. 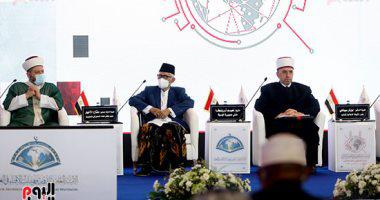 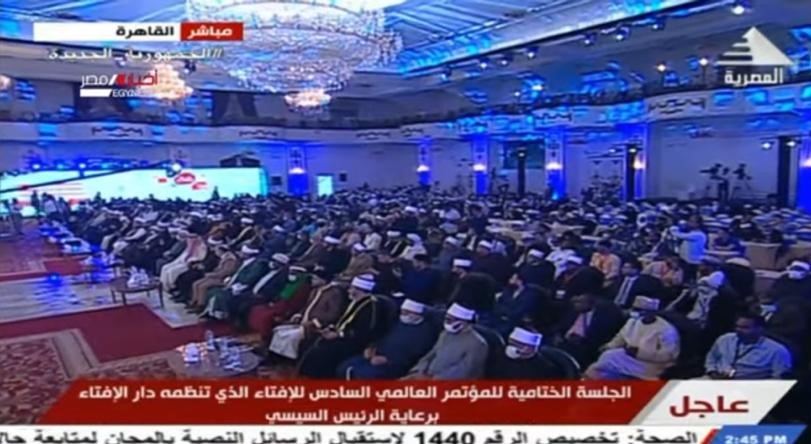