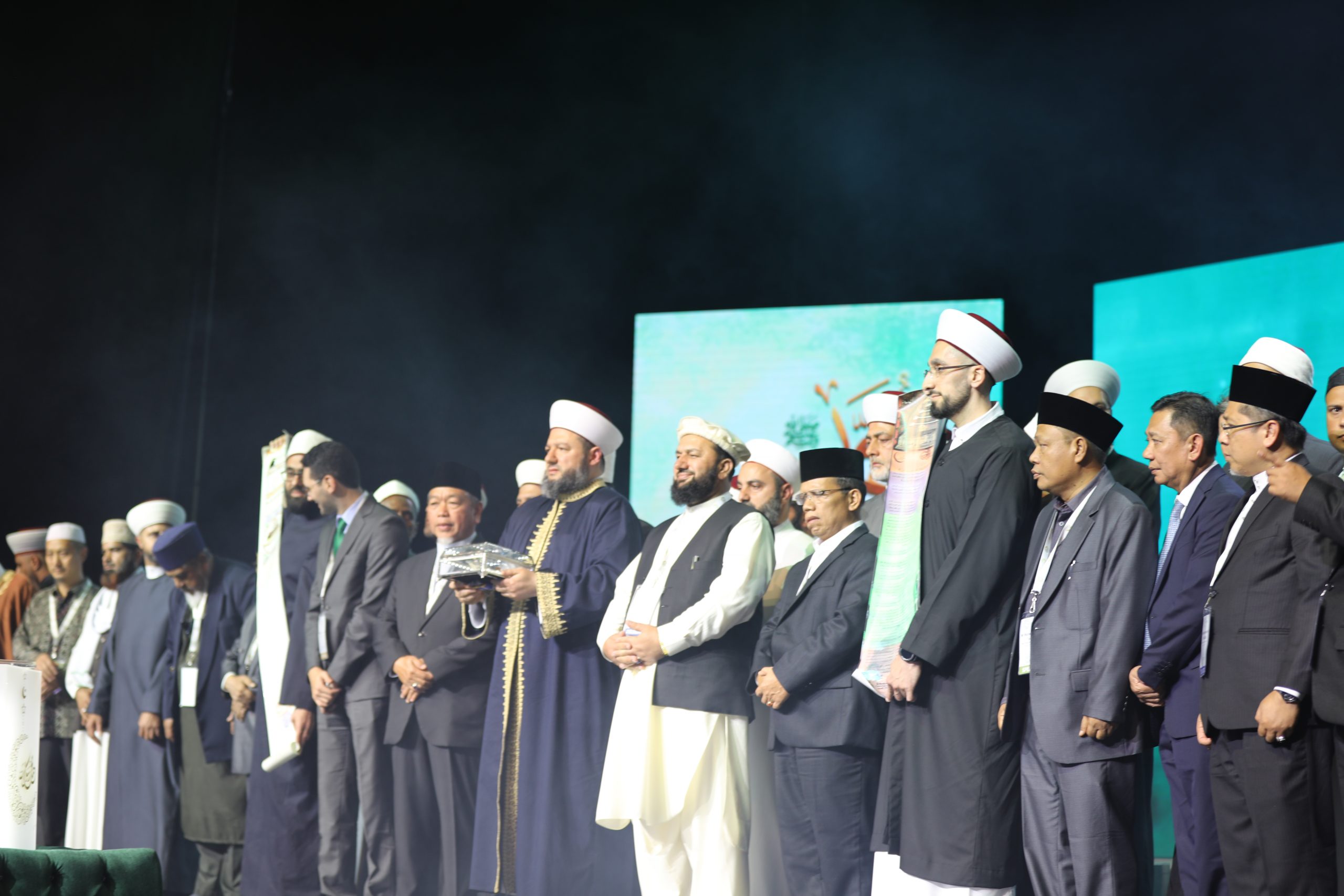 I start in the Name of Allah. Praise be to Allah, the Creator of the worlds, the One Who does not resemble the creations and is not in need of a throne or sky or direction or place.

May Allah raise the ranks and protect the nations of all of them as well as their Al and Companions and pious followers. Thereafter dear brothers and sisters, dear guests. Verse 6 of the Surat al-Ahzab means:

((The Prophet deserves from the believers more than what they deserve from themselves)).

Whatever Allah wills to be shall be. I praise Allah for this magnificent turnout today. This diverse crowd has come together with their differing colours and languages to show their joy in the birth of the Messenger of Allah, peace be upon him, and to thank Allah for this great endowment.

You have come to say, “We love you O Messenger of Allah; Muhammad. You are the guide and more, for every era.”

Muhammad the truthful guide. Muhammad the one who possesses eloquent speech. You are our role model, O most accepted by Allah. You enlighten our path, O Prophet of Allah. Muhammad, the trees testified to your prophethood. Muhammad, the rocks greeted you.

Muhammad, moderation and the middle path are your teachings and your methodologies. For, you are the one who came forth with the truth, proper guidance, justice, and good advice.

Muhammad, seeking blessings by your traces is a tradition you taught your companions. It was passed down to the preceding Muslims, who passed it to the latter.

For, it was you who told the barber to shave the right and the left sides of your head after you performed your final Haj. It was you who called upon abu Talha al-Ansariyy and gave him from the hairs and said to him, “divide it among the people” as in related in the two Sahih books.

I swear by Allah, that if I had in my possession one of your relics, it would be more valuable to me that having the silver and gold that is on the earth or in the earth, O best of Allah’s creations.

Brothers and sisters in belief: and here we are today altogether in this place and at this time, with our different languages, colours and classes.

We gather testifying in the Oneness of God, and united in the love of Muhammad, rejoicing the birth of Prophet Muhammad, the trustworthy one.

We all consider that the origin of the celebration of the Prophet’s birth, which refers to gathering people, reciting Qur’an, reciting what is narrated about the events of his birth and the stories of his advent, peace be upon him, is a good innovation.

We all agree that the person who does it would be rewarded due to the benefit contained in such practices. This includes honouring the status of the Prophet peace be upon him and showing the joy and good tidings that surrounded his honourable birth.

This was agreed upon by the reliable scholars, muhaddiths and jurisprudents, and their statements about this are one.Hence, praise be to Allah for this great endowment and may Allah keep us steadfast in upholding the commemoration of the birth of Prophet Muhammad every year.

May Allah’s peace and blessings be upon you all my dear brothers and sisters.

Umm Ma^bad Describes the Messenger of Allah, peace be upon him