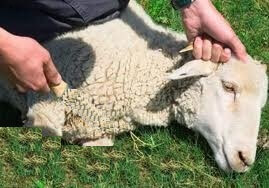 To the Islamic Law ‘Shari^ah’ We start with the name of Allah.  We praise Allah and thank Him for the blessings of Islam.  We humbly ask Allah to raise the rank of our Prophet Muhammad, his kind Al and Companions and to protect his nation from that which he fears for it.  We ask Allah to grant us the proper intention, the Comprehension, and the reward in the Hereafter.

Certain animals including some types of birds can be lawfully consumed if they are slaughtered according to the Islamic Law. There are strict requirements for the slaughtering of edible animals that must be met in order for the slaughtering to be considered as halal. This means that the following rules must be followed:

The slaughterer must be either a Muslim or one of the People of the Book (Ahlul-Kitab).

That the animals and birds are NOT KILLED prior to slaughtering That the slaughtering be performed by a sharp tool (such as a knife), enabling the animal to bleed due to the severing of both the respiratory tract and oesophagus.

That there is NO name other than Allah’s mentioned over the animal at the time of slaughter.

Ps.:      According to some scholars there is an additional condition for the validity of slaughtering and that is to say the basmalah (i.e. to say bismillah) upon slaughtering

What is the Islamic Judgement regarding exposing the animal

to an electric shock prior to slaughtering?

If the animal recovers and returns to its natural state after having been stunned, then the animal was slaughtered, it remains lawful (halal) to consume it even though at the time of slaughtering the animal was in a state where it cannot see or hear and is unable to move. This is because the shock in itself did not result in the animal’s death.

However, if the animal does not return to its natural state after being stunned, then is slaughtered it follows that the meat is not halal and consuming it would be unlawful unless one is certain that the animal was alive at the time of the slaughtering, evidence of which would be the gushing or spurting of blood. \

The automatic slaughtering machine is not approved Islamically as a method of valid slaughtering as it does not meet one of the conditions stated above (i.e. the hand-slaughter by either a Muslim or kitabiyy).

We ask Allah to keep us steadfast to the methodology of Prophet Muhammad (peace be upon him), Ameen.