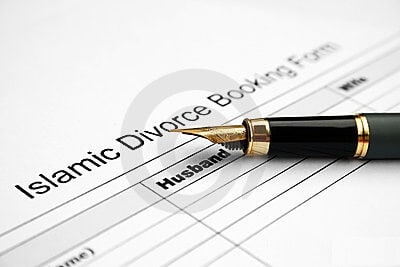 Knowing the rules of divorce is important for both spouses. Although only the husband can initiate divorce, the wife must be aware of its implications so that she can conduct her affairs in accordance with the religion should the divorce take place.

Divorce is of two types: explicit or implicit.

The explicit is that which takes place regardless of the intention and its statement bears only one meaning according to the language. This includes using the word divorce for example, I divorce you or answering yes to the question do you divorce your wife?

The implicit can bear several meanings and divorce takes place only if there was an intention for it with the initiation of the statement. Some examples are, “go back to your parents”, “you are on your own”, or “start calculating your iddah”.

Additionally, divorce can be made contingent on a matter such as saying if you do so and so then you are divorced, in such a case should the woman do the mentioned matter then she will become divorced.

When a woman is divorced she must wait out her iddah before marrying another and before leaving her home (except for a need such as to gain her sustenance or to learn/teach the obligatory knowledge). If a woman gets her menstrual period then her iddah is 3 cleanliness periods. If she has reached the age of menopause then her iddah is 3 lunar month and if she is pregnant then it is when she delivers.

^Iddah from divorce or separation

During the iddah period, the husband can return her to the marriage by saying I now return you to my marriage, unless this was the 3rd divorce. A 3 tiered divorce takes place if the husband says I divorce you by 3 for example or I divorce you once but intending for the 3 tiered divorce to take place or if this is the third time in which he divorced her even if those times are separated by lengthy time intervals. In such cases, the wife is divorced by three.

A marriage may be terminated (by divorce) and re-initiated twice (with the above statement) without needing a new contract provided this is done during the iddah. If the idda has passed then a new contract is required. If after a 3 tiered divorce the couple want to be re-married then she must finish her current iddah, marry another man, have sexual intercourse with him, have him divorce her, finish that iddah, and only then can she remarry the first man but with a new contract. If this process is not undertaken the couple cannot be together and if they are then it is an unlawful relationship.

In addition, divorce is classified into 3 types. Permissible, ie not sinful, sinful, and neither nor.

The permissible divorce is that which is after the primary sexual intercourse, free of regret, and not during a cleanliness period in which he copulated with her (wa la fi haydin qablah). In this type of divorce the iddah commences immediately.

The sinful divorce is after the primary sexual intercourse, in a cleanliness period during which he had sexual intercourse and there were no signs of pregnancy, in such a case he may regret if a pregnancy had occurred. Also, if she is in her menstruation or post partum bleeding it is sinful to divorce her because this will make her iddah longer.

The neither nor divorce occurs when he divorces her prior to the primary sexual intercourse, she is pregnant, or has reached the menopausal age.