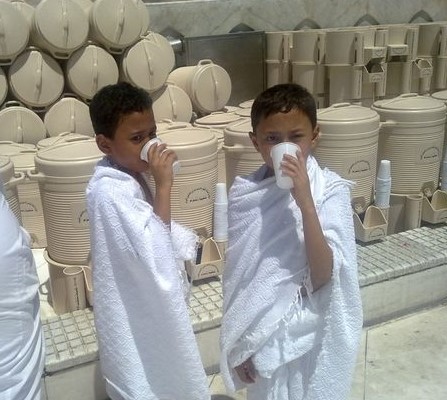 For a period of time, Prophet Ibrahim resided with his wife Sarah in Palestine.

At 70 years of age, Sarah was an infertile old lady who was so keen to see her 86 years old husband Prophet Ibrahim become a father.

For that reason, she offered him Hajar, her maid (female slave), whom he accepted. By the Will of Allah, Hajar became pregnant with Prophet Ibrahim’s son Isma^il who also became a prophet and was honoured to be the grandfather of Prophet Muhammad may Allah’s blessings and peace be upon them all.

Prophet Ibrahim was delighted to have a child and so was his wife Sarah. After a period of time Prophet Ibrahim went with his baby son Isma^il and his mother Hajar to Makkah.

Observe how reliant upon and submissive to Allah Prophet Ibrahim ^alayhis-salam was.

Prophet Ibrahim ^alayhis-salam had left his two dear ones, Hajar and Isma^il in a barren area in Makkah. Makkah at the time was completely isolated with no evident buildings or people living there since there was no water for survival.

There, Prophet Ibrahim left them with only a bag of dates and a leather bag filled with water.

When Hajar noticed that Prophet Ibrahim was about to make his way back to Palestine alone, she followed him saying: “O Ibrahim, are we to be left alone in this valley with no water, or food or companions?” To that Prophet Ibrahim did not respond. So she kept posing the question repeatedly without getting an answer from Prophet Ibrahim, therefore, she said, “Did Allah order you to do this?”  He replied, “Yes.”  Upon hearing this, eloquently and with a complete reliance on Allah she said: “Then we will not be lost.”

Following the order of Allah, Prophet Ibrahim peace be upon him left and when he was a fair distance away from Hajar and their son, he looked back at the Sacred House (Al-Bayt) and as mentioned in Ayah 37 of Surat Ibrahim, he made the following supplication to Allah:

“O Lord! I have settled some of my offspring in a barren valley by Your Sacred House so that they would perform the Prayer. O Lord, make the hearts of some people yearn towards them and provide them with fruits for which they would give thanks”.

Hajar, the mother of Isma^il settled with her son where Ibrahim peace be upon him left them. She breast-fed him and drank from the water that Ibrahim had left for them. This water eventually ran out as the water container dried up. Consequently, Hajar became thirsty, and so did her son who started crying and became unsettled due to his extreme thirst.

Hajar hated seeing him in that state and she set forth looking for water. As-Safa being the mountain closest to her, she climbed it and looked down at the valley to see if she could find anyone to assist her. She found no one and so she descended from the mountain until she reached the valley.

Then she climbed Al-Marwah Mountain in keeping her search for water but to no avail. She went back to As-Safa then back again to Al-Marwah for many times. On her last arrival to Al-Marwah, she heard a voice which prompted her to call out: “Help, if you can”.

There was Angel Jibril peace be upon him, who hit the ground with his wing until fresh and pure water emerged. That became known as Zamzam water. The mother of Isma^il gathered the water with her hands and collected it in her container while it was springing out. Jibril said: “Do not fear loss, for there is a sacred House here which will be built by this child and his father”, meaning Isma^il and his father Ibrahim peace be upon them both.

Hajar drank from Zamzam water quenching her thirst and breast-fed her son Isma^il. She thanked Allah, the One who endows countless bounties upon His slaves.

O Allah, we ask you to grant us Al-Hajj and Al-^Umrah and the visit of the Prophet peace be upon him, and we ask You Allah to make us amongst those who drink from his honourable hand at the Hawd. Amin.