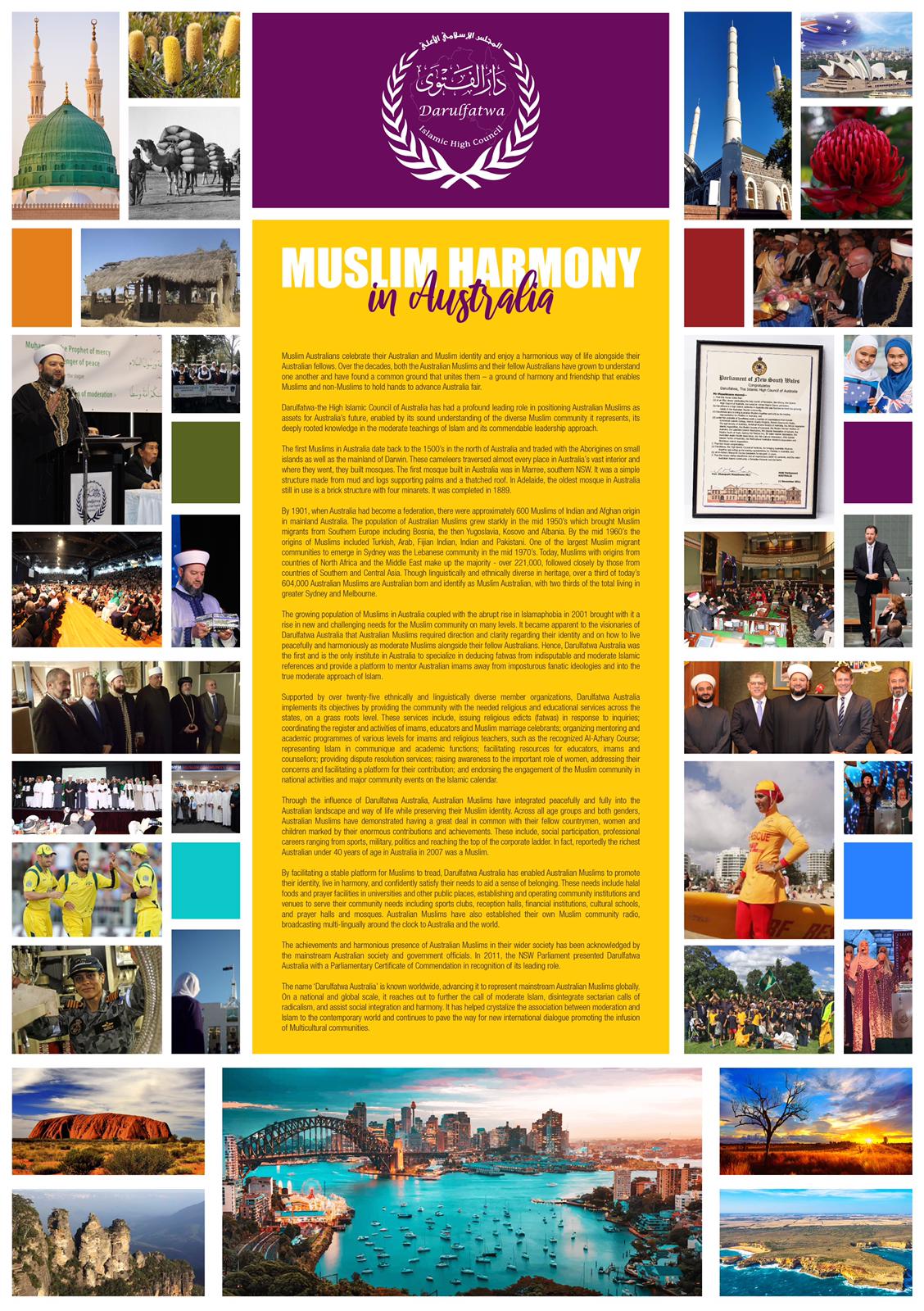 Darulfatwa-the High Islamic Council of Australia has had a profound leading role in positioning Australian Muslims as assets for Australia’s future, enabled by its sound understanding of the diverse Muslim community it represents, its deeply rooted knowledge in the moderate teachings of Islam and its commendable leadership approach.

The first Muslims in Australia date back to the 1500’s in the north of Australia and traded with the Aborigines on small islands as well as the mainland of Darwin. These cameleers traversed almost every place in Australia’s vast interior and where they went, they built mosques. The first mosque built in Australia was in Marree, southern NSW. It was a simple structure made from mud and logs supporting palms and a thatched roof. In Adelaide, the oldest mosque in Australia still in use is a brick structure with four minarets. It was completed in 1889.

By 1901, when Australia had become a federation, there were approximately 600 Muslims of Indian and Afghan origin in mainland Australia. The population of Australian Muslims grew starkly in the mid 1950’s which brought Muslim migrants from Southern Europe including Bosnia, the then Yugoslavia, Kosovo and Albania.

By the mid 1960’s the origins of Muslims included Turkish, Arab, Fijian Indian, Indian and Pakistani. One of the largest Muslim migrant communities to emerge in Sydney was the Lebanese community in the mid 1970’s. Today, Muslims with origins from countries of North Africa and the Middle East make up the majority – over 221,000, followed closely by those from countries of Southern and Central Asia.

Though linguistically and ethnically diverse in heritage, over a third of today’s 604,000 Australian Muslims are Australian born and identify as Muslim Australian, with two thirds of the total living in greater Sydney and Melbourne.

The growing population of Muslims in Australia coupled with the abrupt rise in Islamaphobia in 2001 brought with it a rise in new and challenging needs for the Muslim community on many levels. It became apparent to the visionaries of Darulfatwa Australia that Australian Muslims required direction and clarity regarding their identity and on how to live peacefully and harmoniously as moderate Muslims alongside their fellow Australians.

Hence, Darulfatwa Australia was the first and is the only institute in Australia to specialize in deducing fatwas from indisputable and moderate Islamic references and provide a platform to mentor Australian imams away from imposturous fanatic ideologies and into the true moderate approach of Islam.

Supported by over twenty-five ethnically and linguistically diverse member organizations, Darulfatwa Australia implements its objectives by providing the community with the needed religious and educational services across the states, on a grassroots level.

These services include issuing religious edicts (fatwas) in response to inquiries, coordinating the register and activities of imams, educators and Muslim marriage celebrants, organizing mentoring and academic programmes of various levels for imams and religious teachers, such as the recognized Al-Azhary Course; representing Islam in communique and academic functions, facilitating resources for educators, imams and counsellors; providing dispute resolution services; raising awareness to the important role of women, addressing their concerns and facilitating a platform for their contribution; and endorsing the engagement of the Muslim community in national activities and major community events on the Islamic calendar.

Through Darulfatwa Australia’s influence, Australian Muslims have integrated peacefully and fully into the Australian landscape and way of life while preserving their Muslim identity.

Across all age groups and both genders, Australian Muslims have demonstrated having a great deal in common with their fellow countrymen, women and children marked by their enormous contributions and achievements. These include – social participation, professional careers ranging from sports, military, politics and the top of the corporate ladder. In fact, reportedly the richest Australian under 40 years of age in Australia in 2007 was a Muslim.

By facilitating a stable platform for Muslims to tread, Darulfatwa Australia has enabled Australian Muslims to promote their identity, live in harmony, and confidently satisfy their needs to aid a sense of belonging.

These needs include halal foods and prayer facilities in universities and other public places, establishing and operating community institutions and venues to serve their community needs including sports clubs, reception halls, financial institutions, cultural schools, and prayer halls and mosques. Australian Muslims have also established their own Muslim community radio, broadcasting multi-lingually around the clock to Australia and the world.

The achievements and harmonious presence of Australian Muslims in their wider society have been acknowledged by mainstream Australian society and government officials. In 2011, the NSW Parliament presented Darulfatwa Australia with a Parliamentary Certificate of Commendation in recognition of its leading role.

The name ‘Darulfatwa Australia’ is known worldwide, advancing it to represent mainstream Australian Muslims globally. On a national and global scale, it reaches out to further the call of moderate Islam, disintegrate sectarian calls of radicalism, and assist social integration and harmony.

Darulfatwa Australia has helped make clear the association between moderation and Islam to the contemporary world and paves the way for new international dialogue, promoting the infusion of Multicultural communities.