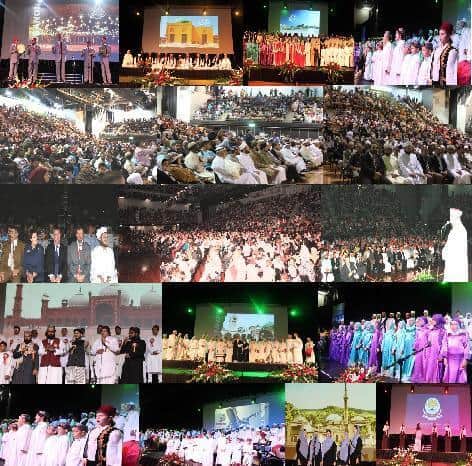 More than 4,000 people Celebrate Al-Mawlid the Birth of Prophet Muhammad (peace be upon him) in Sydney Olympic Park Sports Centre.

In collaboration with the Muslim Youth of Truth Association and the local Muslim Community in Sydney, the Islamic Charity Projects Association held a huge festival attracting more than 4,000 people of different races, communities, religions, Religious Imams, politicians and others.

Multicultural Mawlid Concert  held its Annual Festival on friday 12th of March  to celebrate the special occasion of the Birth of Prophet Muhammad (peace be upon him). A Concert  indeed organized to unite the Australian Muslim Community under the banner of moderation and harmony.

All generation were mainly concerned in observing the live performances on stage it was a Spectacular and sensational performances by talented groups expressing their love and devotion to Prophet Muhammad peace be upon him in Arabic – English – Urdu (Ahle Sunnat Cultural & Welfare Association.)- Bosnian – Harari ,in particular the performance of the Islamic Charity Projects Association Band who were certainly in the spotlight. An Association who played a major role is helping organize the Festival and sparkling the atmosphere of joy through the spectacular Islamic Chanting Band and let’s not forget the broadcast from our one and only Muslim Community radio 92.1 2mfm.

He said On the 12th of Rabi^ ul-‘Awwal of every year, an honoured and glorified memory shines over the whole world, and is commemorated by the entire Muslim world. They celebrate the birth of the best human, our Master Muhammad sallallahu ^alayhi wa sallam.

This verse means that Muhammad was the last of the messengers and the prophets sallallahu ^alayhi wa sallam.

He is Muhammad, whom Allah has given manners that were all what the Qur’an ordered to do, he is Muhammad who accepts what the Honourable Qur’an calls to accept, he followed the manners and conducts that the Qur’an called for and abided by its orders. He never revenged on his own behalf unless the boundaries of the Religion were violated.

The Prophet, sallallahu ^alayhi wa sallam, used to joke with his Companions as a means of comforting them and showing his love towards them because of the hardships they were facing at that time. This resulted in a release of stress; however, he used to joke without violating the rules of the religion by always speaking the truth because all prophets are impeccable from lying both before and after prophethood.

He used to sit and eat with the slaves never showing superiority over them and used to say: “I’m just a slave; I eat as the slave eats, and I sit as the slave sits.”

It means: “Verily, your manners are distinguished and great.”

It means: “His manners were all what the Qur’an ordered to do.”

Among the great innovations of guidance is the annual celebration of the Prophet’s birth (Mawlid un-Nabiyy). This event is commemorated by Muslims all over the world who join together for such rewardable deeds as reciting from the Qur’an, chanting Islamic praises, telling the story of the Prophet’s birth, teaching Religious Knowledge, slaughtering animals to feed to the poor, and gathering to thank and praise Allah and ask Him to exalt the honor of Prophet Muhammad, sallallahu ^alayhi wa sallam.

The honorable, knowledgeable, and righteous ruler: al-Mudhaffar, the King of Irbil{1}, initiated this practice about 900 years ago, and he was praised by Muslim scholars of Islam–among them the Egyptian hafidhs: Ibn Hajar al-^Asqalaniyy and Jalal ud-Din as-Suyutiyy. The famous scholar of hadith, Abul-Khattab Ibn Dihyah, wrote a book for the king especially to be read during the mawlid celebration, and there are no great Muslim scholars who dispraised this innovated celebration.

The basis for commemorating honorable events repeatedly every year is evidenced in the Sunnah of the Prophet. As related by al-Bukhariyy, when the Prophet emigrated to al-Madinah he found the Jews fasting, so he asked them why they fasted on the 10th of Muharram{2}.

They told the Prophet they do so to commemorate the day Allah saved Prophet Moses (Musa) and the Tribes of Israel (Isra’il) from the tyranny of the Pharaoh.

To celebrate the birth of the Prophet by doing rewardable deeds– that can be done on any day of the year–is considered an innovated practice because this was not done at the time of the Prophet.

This definition of the two types of innovations was given by many knowledgeable and trustworthy scholars of Islam; among them Imam ash-Shafi^iyy, Imam an-Nawawiyy, al-Bayhaqiyy, and the Hafidh, Ibn Hajar al-^Asqalaniyy.

It is apparent Muslims have not gone astray in celebrating the birth of the Prophet, based upon the aforementioned hadith, because the deeds practiced during this event are considered rewardable by the standards of the Religion, and in line with the definition of innovations of guidance.

Aggression against the humanitarian relief