After all the hardships of the boycott, the deaths of family members, and the reaction at Ta’if, God blessed our Prophet ﷺ with a magnificent honor and experience. Two years before immigrating to Madinah, when Prophet Muhammad ﷺ was fifty-one (51) years old, he left Makkah, from the house of Lady Umm Hani’, his paternal cousin, on a night journey (Isra’).

The journey was by both body and soul, and is confirmed in the Qur’an (Al-Isra’ /1) and Hadith. The Prophet ﷺ related that it was night and his chest was cut open like when he was a young boy with Halimah. This was to prepare him for the greatness of what was about to happen to him.

Angel Gabriel brought al-Buraq to him. Al-Buraq is one of the animals of Paradise. With one stride, this animal goes as far as it can see. It is the same animal that Prophet Ibrahim, peace be upon him, had ridden in his trips between Makkah and ash-Sham area. The Prophet ﷺ rode behind Gabriel on al-Buraq and they passed by al-Madinah (before the Prophet migrated to it). The Prophet descended and prayed.

On the night of the Journey, a huge honor for the Prophet ﷺ occurred. God gathered all the prophets from Adam to Jesus, peace be upon them, in al-Masjidul-Aqsa. The Prophet ﷺ led them as their Imam in prayer.

Previously, all the prophets had taken an oath to God. They vowed that, if they were alive when the final prophet received his Revelation, they would believe in and help him to be victorious. Each one of the prophets had ordered his followers to comply with this oath as well.

During this night Journey, on his way to Baytul-Maqdis (Jerusalem), Prophet Muhammad ﷺ saw many unusual things; among them:

The Almighty God created signs that indicated the extreme goodness of some deeds and the extreme badness of others.

Among these signs, which Prophet Muhammad ﷺ saw were:

Our Prophet, peace be upon him, smelled a nice scent from a grave and asked Gabriel about it. Gabriel told him that it was the grave of the woman who used to comb the hair of Pharaoh’s1 daughter. This comber was a pious believer. While she was combing the hair of Pharaoh’s daughter, the comb dropped from her hand. As she was picking it up, she said, ”Bismillah (in the Name of God)”.

The daughter of Pharaoh asked her, ”Do you have a Lord other than my father?”
The woman replied, ”Yes. My Lord and your father’s Lord is God”.
The daughter told her father. The Pharaoh ordered the woman to change her Religion, i.e., to leave the Religion of Islam. She refused.

The Pharaoh ordered a big container filled with water on a fire to boil. Then, one by one, he threw her children into it. When he wanted to throw a young child of hers, God enabled the child to say, ”O mother, be patient. The torture in the Hereafter is greater than the torture you bear in this world. Do not waver; you are on the truth”.

The woman said to the Pharaoh, ”I ask you to fulfil my wish to gather the bones and bury them together.”
The Pharaoh said, ”You have that”.
He then threw her into the container. She and her children died as martyrs.

The Night Journey (Isra’) of our Prophet ﷺ 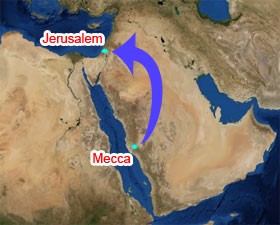 Our Prophet ﷺ travelled from Makkah to Jerusalem and up through the seven heavens and back, in less than one night.

1 This Pharaoh was the extremely unjust ruler of Egypt, during the time of Prophet Moses, peace be upon him. He declared to the people that he was their Lord. If a person refused to worship him, he would kill him in a torturous way. He was known as the ”Lord of the Posts,” for he would tie those who did not believe in him to four posts and torture them to death. He even killed his own wonderful, compassionate wife, Asiyah, by having her tied under a huge millstone, for she believed in Moses. God mentions in the Qur’an, in Suratul-Tahrim, verse 11, that she was one of the best women, along with Mary, the mother of Prophet Jesus.

The Miracles of Our Prophet ﷺ