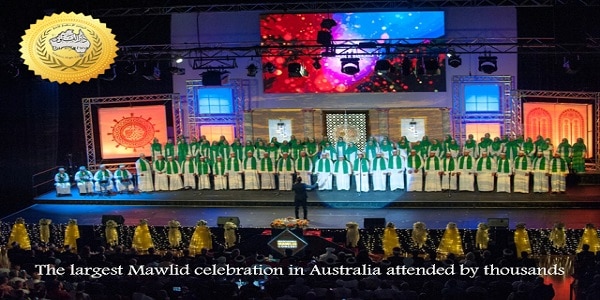 For the First Time in History for Australian Muslims, Royalty Attended Their Grand Multicultural Mawlid Concert Under the Patronage of Darulfatwa Australia

In an annual show of solidarity, social harmony and multiculturalism, a breathtaking celebration was organized by the Islamic Charity Projects Association to mark the annual Multicultural Mawlid concert to commemorate the honourable occasion of the birth of the most beloved, Prophet Muhammad (Peace be upon him).

The celebration was held on Sunday the 11th December 2016, coinciding with the 12th of Rabi^ul Awal, at Sydney Olympic Park Sports Centre, under the patronage of Darulfatwa Australia. It was marked by the presence of distinguished world figures sitting side by side next to politicians and dignitaries before a crowd of thousands.

This year, the prestigious guest list was crowned by the presence of HRH Prince Amir Nasser Ibni Tengku Ibrahim. He is the son of HRH Prince Abdullah Ibni Sultan Hajj Ahmad Shah, for the regent of Pahang, Malaysia.

Beside the Prince sat international dignitaries, the Hon. Dr. Sheikh Ahmad Hasym Muzadi, religious adviser to the president of Indonesia, and previous president of Nahdlatul Ulama Association and Mufti of Pahang Dr. Haji Abdurahaman bin Haji Osman, who arrived to Sydney on Saturday for the Concert.

A spectacular crowd of over 5000 attended from across Sydney and Australia to celebrate the prophet’s birth by praising Allah and earn His reward. They sat united in their love and admiration of one man – the honourable Prophet Muhammad, the best of creation.

Encompassing the slogan “Muhammad, peace be upon him – the guide from darkness to light”, the annual event amplified the message that prophet Muhammad (peace be upon him) undisputedly brought guidance and justice to the world.

Preceding the main event was a VIP ceremony held in the Stadium lounge in which several distinguished guests attended.

The VIP ceremony commenced with speeches from various guests praising the importance of the event.  The first was welcoming words of the Chairman of the Islamic Charity Projects Association, Dr Ghayath Al-shelh who said:

“We are here together to hear the voice of the true mainstream community from all walks of life, coming from all nations”

The Hon. Ahmad Hasym Muzadi was also kind enough to impart a few words in Arabic and was briefly translated by Mr. Wissam Saad.

He praised Darulfatwa by stating “Darulfatwa is the true face of Islam, it presents the true Islam to the people and this is what Islam is about, it is a religion of peace and mercy to the people”

It was also a pleasure to hear from the Federal Member for Banks, Mr. David Coleman MP who represented Prime Minister the Hon Malcolm Turnbull. He relayed a message from the Prime Minister who said:

“In Sydney, the Multicultural Mawlid Concert is a day of community engagement, a chance of those from different backgrounds and cultures to perform and to be part of the celebration”

Also, in attendance was the Leader of the opposition the Hon.  Bill Shorten represented by Mr. Tony Burke MP. He briefly spoke about the job that we all have in making sure that the voice of anger and hatred is never the loudest voice.

“I look around at all the organisations that are represented today, I know you are contributing in so many different ways and I thank you and commend you for doing that and acknowledge that New South Wales is a richer place because of that”

Following the speeches, the main event officially began and unveiled one surprise after another.  It officially commenced with a sensational speech by His Eminence Sheikh Ibrahim Ashafie – the Vice President of Darulfatwa Australia who once again drew everyone’s attention to his powerful and rousing address.   He set the scene concisely and highlighted the theme of this year’s Mawlid celebration in the true Arabian style of poetry.   He said:

Oh light that illuminates darkness, hide – for he is the true guide from darkness to light”.

The mawlid onlookers were treated to a host of entertaining performances including a glorious Quranic recitation that was presented by Adam Ali and a group of background reciters. As smoke filled the stage, Adam Ali presented a heart rending narration of the story of the prophet’s life, before his birth, at his birth, during childhood, and his life amongst his people in Makkah and al-Madinah.

The stadium soon became engulfed with melodic and tuneful stage performances that sent the crowd to a high level of jubilation.

Adorned in white and green, the Islamic Choir Group of men and women, eloquently delivered a number of heart-warming performances in praise of Prophet Muhammad (Peace be upon him). Attracting a large audience, their performance was particularly unique as they were the first international group to perform live as a choir at any Multicultural Mawlid Concert in Sydney.

The Muslim Kids Club performance was immensely remarkable as well.  Adorned with vibrant and colourful traditional attire and with smiles etched on their faces, the hundreds of children knew exactly how to capture our hearts with their words of praise for the prophet in diverse languages.

We cannot go past the glorious moment when the stage became alit with the jewelled box which contained two traces of the Prophets hair peace be upon him. A grand convoy of imams and sheikhs from different cultural groups accompanied the trace of the prophet peace be upon him that engulfed over 5000 spectators with absolute astonishment.

The two traces of the prophets hair were later made available for all to practice the praiseworthy deed of seeking blessings by it.

The special guests from Indonesia and Malaysia were also treated to a small token of appreciation presented by Dr. Sheikh Salim Alwan Al-Husseiniyy, the Chairman of Darulfatwa Australia. In his address, he welcomed attendees, and affirmed the purpose and permissibility of celebrating the birth of Prophet Muhammad

The final performance was presented in several languages by several Multicultural Groups who immersed the stage with brilliance as they resounded the love and glorification of the prophet peace be upon him. Without disappointment, each Multicultural participating group (from Turkey, Indonesia, Polynesian, Malaysia, Pakistan, Sudan, Lebanon, Bosnia, Uighur) delivered a sensational message about the excellence of Prophet Muhammad (Peace Be Upon Him).

The event finished off with a humbling supplication made by the honourable guest, Mufti of Pahang Haji Abdul-rahaman bin Haji Osman.

Then to our surprise and delight, a young woman testified that ‘No one is God except Allah and Muhammad is the Messenger of Allah’ and embraced Islam after becoming so moved witnessing this glorious event.

Darulfatwa Australia extends their appreciation to the organizing committee and all volunteers led by the Islamic Charity Projects Association who contributed to the success of the Multicultural Mawlid Concert. We ask Allah to grant us peace and prosperity in the return of this blessed occasion next year.