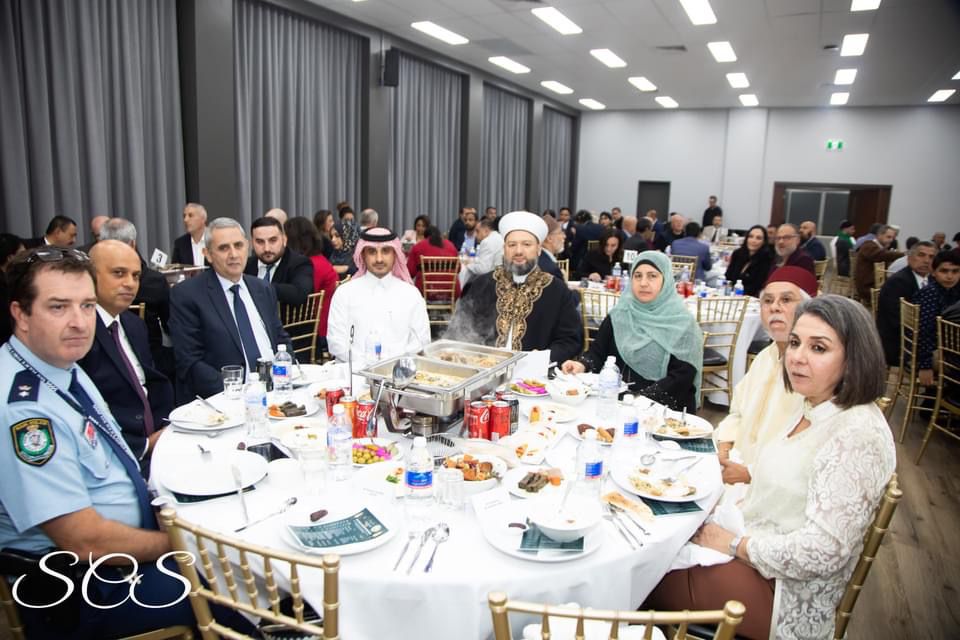 Over 330 dignitaries and special guests attended the event held under the patronage of Darulfatwa at the newly renovated Salamah College Assembly Hall on Friday 8th of April 2022 coinciding with the 7th day of Ramadan 1443AH.

For 28 years, ICPA has held this event to promote the noble values of the Holy Month of Ramadan as well as demonstrate ICPA’s commitment to celebrating diversity, encouraging social harmony, and facilitating cross-cultural collaboration.

Event MC and Salamah College School Principal Mr Wissam Saad recognized all the officials and dignitaries in attendance, which include:

After his welcoming remarks and acknowledgement of attendees, Mr Wissam Saad invited Salamah College student, Adam Malas to recite some noble verses of the Holy Qur’an.

This was followed by an inspiring performance of the Australian National Anthem by Ms Mariam Saad.

Mr. Mohamad Mehio, President of the Islamic Charity Projects Association was then welcomed to give his keynote address. In his address, Mr Mehio highlighted the importance of knowledge in being able to identify extremist ideologies and stand tall with a proud Australian Muslim Identity, ready to serve communities and our nation.

“Be assured that the ICPA is an assurance for peace and harmony in this country and abroad. While the world is busy looking at ways to counter violent extremism, many have overlooked the teachings of prophet Muhammad who fought and countered extremism some 1440 years ago. It is a task ICPA members have taken upon themselves so that
every one can differentiate between a good Australian Muslim and an “undercover” preacher of hate and extremism.

After commenting on the significance of the occasion, Chairman of Darulfatwa, the Islamic High Council of Australia, Professor Dr. Sheikh Salim Alwan spoke about how Darulfatwa harnessed the use of digital technology and social media during the pandemic to deliver greater awareness and guidance.

“Using digital technology and social media platforms, we have found a window into society enabling us to deliver awareness and guidance”.

He then reassured the guests of Darulfatwa’s long standing mission of promoting unity, truth, guidance and renouncing firm and in unity with abhorrent extremism and violence.

This was followed by the presentation of an enthralling video production which offered insight into the remarkable history and growth of the Sydney ICPA since its inception in 1989.

MC Mr. Wissam Saad then read a written message on behalf of the Prime Minister of Australia, The Hon. Mr Scott Morrison MP who reiterated the significance of Islam.

The Hon Jason Clare MP Federal Member for Blaxland representing Leader of the Opposition, The Hon. Anthony Albanese praised the spirit of Ramadan and the opportunities it brings for cross-cultural understanding and awareness.

Among those who also expressed their joy in attending the Iftar dinner
with the diverse community is Ms Wendy Lindsay, MP Member for East Hills representing the Premier of NSW, the Hon Mr. Dominic Perrottet. In her address, Ms. Lindsay expressed her delight in attending the Iftar and recognized the efforts of 2MFM radio for their great contribution in the local community.

“It’s done a lot for your community and also different broadcasting throughout this area”.

This was followed by a speech made by Mr. Stephen Kamper, MP, Member for Rockdale Shadow Minister for Multiculturalism representing NSW Leader of the Opposition The Hon Chris Minns, MP. Mr. Kamper praised ICPA for their efforts to engage the local community during Ramadan.

“The ICPA Iftar was a real eye opener for me personally to see essentially the inclusion and what you do for our society holding these events, greater awareness for the broader community”

Other highlights of the evening included the official presentation ceremony to acknowledge the Graduates of the 2021 Al Azhar Course. Dr. Sheikh Salim Alwan, and Mr. Yasser Abed, Consul-General of Egypt, were called to the stage to present the 2021 graduates from Darulfatwa Australia, with certificates of recognition and appreciation.

The Islamic Charity Projects Association wishes to extend its thanks to all guests who contributed to the positive reception of the evening and for marking this noble Islamic occasion with the Muslim community.

I start in the name of Allah, ar-Rahman ar-Rahem

Praise be to Allah the Lord of the worlds, the One whose existence is without a beginning and without an end and is not designated by place. May Allah raise the rank of the Messenger of Allah and his al and companions.

Thereafter,
Allah said in the Qur’an:

Ayah 185 of Surat al-Baqarah means: The month of Ramadan is when the Qur’an was brought down to guide the people with clear verses of guidance and instructions. So, let whoever observes the month fast it.

The month of Ramadan has graced us with its honorable tradition and blessed air. Hence, the self rejoices upon its advent and the pure heart welcomes its tidings. Allah the Exalted has made fasting an obligation during this month when the Holy Qur’an was brought down in its entirety from the Guarded Tablet to the first sky. A Holy Book which awakes the conscience, purifies the hearts and cleanses the selves. During this month, the Muslim is filled with positive energy to fulfill acts of worship and benevolence and avoid acts of sin and mischief.

We are all aware of the spread of the Coronavirus and the negative impact it has had on the status of our health, the economy, and society. However, through digital technology and social media platforms, we have found a window to society enabling us to deliver awareness and guidance. In this context, we participated in Cairo, in the conference of the Egyptian Dar-ul-Ifta titled: “The Role of Fatwa Institutions in the Digital Age”

In representing Australia, we stressed the importance for the people of righteousness to seize these technological means to spread awareness and the true Islamic moderate ideology.

We also participated in the 32nd conference of the Supreme Council for Islamic Affairs in Egypt, and the conference of the Executive Council of Ministers of Endowments and Islamic Affairs in the Islamic World in its Thirteenth Session. In addition, we visited al-Azhar Observatory and the Al-Azhar International Centre for Electronic Fatwa to collaborate to combat extremism. All this and more; we did to promote our Australian society and protect it from the hands of extremists and preserve its youth from destructive ideologies.

From this stage and in this special month we would like to assure you renew Darulfatwa’s call for peace and harmony in Australia. We stand firm in unity with the truth and proper guidance and renounce abhorrent extremism and violence.

In closing, I ask Allah the Almighty to grant us and you success and to enable us to observe Ramadan next year, with good health and prosperity. May you be granted success in this life and the next.

Message From the Prime Minister For Ramadan 2022