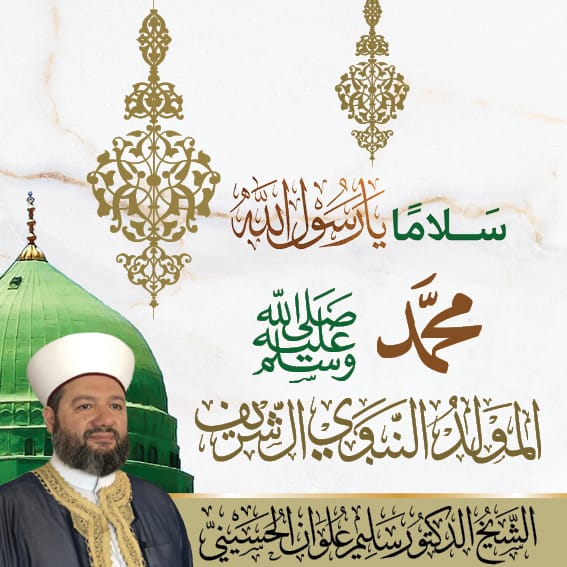 Praise is all due to Allah who has blessed us with Muhammad the master of mankind and the pride of Rabi^ata and Mudhar, he who the moon had split for, the stone had greeted, and the trees sought to serve; may Allah raise his rank and the rank of all his brothers in prophet-hood and messengers, and his family and companions; and protect his nation from what he fear upon them.

Furthermore, Allah the Exalted said about Prophet Muhammad peace be upon him:

which means: We (Allah) sent you only as a mercy to humans and jinn.

Darulfatwa Australia held its Annual Mawlid Celebration on Saturday 23rd October 2021, only this year it was virtual, due to COVID-19 laws and restrictions. The event was held via Zoom and was streamed live on Facebook and Youtube.

Over 40 nations participated in this Mawlid celebration held under the slogan: Greetings, O’ Messenger of Allah, peace be upon you.

The evening’s program was diverse, including speeches by some Arab politicians and ambassadors and some guests from Indonesia and Singapore and various renditions in different languages. 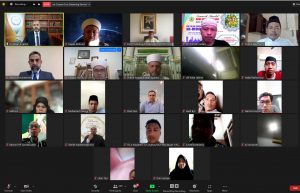 Launching the event was a fragrant reading from the Holy Qur’an by the reciter Mohammed Sabouh al-Azhari. Then was the opening speech of the Chairman of Darulfatwa of Australia, His Eminence Dr. Sheikh Salim Alwan Husseini, who welcomed all those present from Australia and abroad and congratulated the Arab and Islamic nations on the anniversary of the Prophet’s birth. He discussed the merit of such a commemoration and the merit of the one to whom the anniversary belongs – the great Prophet peace be upon him. He is the owner of high morals and exemplary qualities, who called on the nation to follow his example and apply his teachings as it came without extremism or negligence. 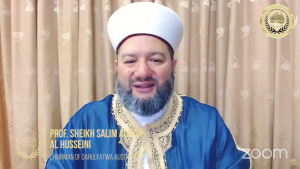 He, the speaker, then diverted his speech to evidencing the permissibility of celebrating the honourable Prophetic Mawlid (birth). He said:

“Among the motives behind this great occasion is for us to practice some of the manners of the one we are celebrating. Al-Bukhariyy narrated in al-Adab al-Mufrad from the route of Lady ^A’ishah, may God accept her, that he said in describing the great Messenger, peace be upon him: ‘His manners were all what the Qur’an orders us to do’.

“Al-Bukhariyy and Muslim narrated from the route of Anas the son of Malik may Allah accept him, that he said: ‘the Messenger of Allah, peace be upon him had the best manners of all the people.

“Moreover our Master ^Aliyy may Allah accept him, in describing the Prophet, peace be upon him said: ‘his was the biggest heart in generosity among all people, and his was the

most truthful tongue among the people and had the gentlest character and was the most honourable to live among. Whoever saw him would instinctively feel his aura and whoever would mix with him and know him would love him. A describer of him said: ‘I did not see neither before him nor after him like him’. Narrated by At-Tirmidhiyy”.

He went on to say:

“The Prophet peace be upon him was always smiling, easy to deal with, gentle, he was never impolite, uncivilized, aggressive, annoying, or criticising.

“From the route of Anas the son of Malik, he said if a man were to come up to the Prophet, peace be upon him, and shake his hand he would not withdraw his hand until the man withdrew his hand. Also, he would not turn his face away from the man’s face until the man turned his face away. Also, he was not seen extending his knees in front of those with whom he sat. Narrated by At-Tirmidhiyy and others.

“These are the manners of our chosen Prophet peace be upon him, and this is what his good companions and honourable family and whoever followed them well, were on.

“So let us all adorn ourselves with these honourable manners and let us contribute to building a better society free of extremism by, acquiring knowledge, practicing it and presenting good manners. With no exaggeration or negligence and no extremism in it or falling short”.

The President of the Islamic Charity Projects Association in Australia, Hajj Muhammed Mehio, then spoke in English. He thanked Darulfatwa for their invite and their approach to conducting such an event. He expressed his appreciation of such initiatives taking place despite the health situations that is affecting people on a national scale and despite social restrictions laid down by the health ministry and the related bodies regarding the gatherings and meetings.

A gathering such as this on this great occasion every year, is not strange to Darulfatwa. In fact, it gathers the Muslims and non-Muslims in an amazing festival in Sydney Olympic Park every year, and now it is uniting us again with the presence of representatives from more than 40 nations so we can experience together the blessings of this good memory.

In turn, Senator Shaoquett Moselmane, who participated also via the Zoom application, delivered a message by which he expressed his thanks and the value of the efforts that Darulfatwa exerts every year to celebrate this honorable occasion on such a large scale, diverse in attendance. He affirmed in his speech the leadership role that Darulfatwa and the associations under its umbrella play on the local Australian and international fronts, in spreading moderation and the middle path and confirming the importance of good social cohesion between all parts of society.

From Canberra, the capital of Australia, there was a speech by the Ambassador of the Kingdom of Morocco to Australia, Mr. Karim Modric. He spoke about the importance of commemorating the Prophet’s birthday and how great it is for us and our pride in our belonging to the Prophet of Mercy,  peace be upon him. The Ambassador congratulated Darulfatwa Australia and its Chairman on this occasion, asking God to return this fragrant occasion to our nation in goodness and blessings.

Then came the speech of the Ambassador of the Arab Republic of Egypt to Australia, Mr. Mahmoud Zayed. He congratulated the Egyptian, Islamic and Arab community on the anniversary of the Prophet’s birthday and expressed his happiness to be part of this international congregation, wishing Darulfatwa and all Muslims further progress and prosperity.

The speech of the Ambassador of the United Arab Emirates to Australia, Mr. Abdullah Ali Al-Sabousi followed. He opened his speech by expressing his heartfelt congratulations to all Muslims in the east and west, stressing the importance of taking this blessed anniversary as a season in which we remember what the Messenger of peace, peace and blessings be upon him, brought. He also praised the role of His Eminence the Chairman of Darulfatwa in recalling this good memory.

Following, the Chairman of the Indonesian Council of Scholars, Dr. Muftah Al-Akhyar Abdul Ghani, spoke. He also expressed his pleasure to participate in this wonderful gathering and thanked Darulfatwa for this wonderful initiative to gather these good faces from many countries, especially with the current circumstances everyone is experiencing.

He also went on to mention some of the religious evidence for the permissibility of celebrating the birthday of the Prophet, and he showed that the deniers of this good deed have no evidence for what they claim, and that there is consensus among Muslims in all parts of the world to take special care to the day of his birth, peace and blessings be upon him.

From Singapore, the Vice-President of the Union of Scholars and Teachers of Islamic Religion in Singapore, Professor Kulthum bint Muhammad Issa, congratulated Darulfatwa for the commendable efforts in holding this blessed international meeting. She also added that the celebration of the birthday of the Prophet, peace and blessings be upon him, urges Muslims to adhere to the teachings of Islam and continue in the footsteps of the Prophet and always follow his words and actions. She also congratulated the Muslims in general on this honourable anniversary. 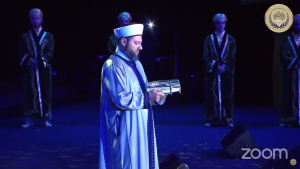 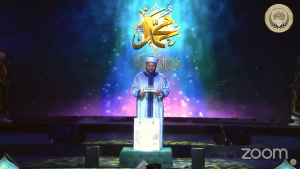 After that, there were chant performances in which renditions in diverse languages were exhibited including the Arabic, English and others, performed by many children and adults.

The program paid a tribute to past live Mawlid Concerts by repeating select parts from the previous Concerts that took place at the Sydney Olympic Park, with the participation of thousands from different communities.

In closing the program, His Eminence Sheikh Bilal Homaysi delivered a supplication.

Then the microphones where open for the participants who wanted to talk. Spontaneous words were exchanged between most of the attendees from different countries, and expressions of joy appeared on their faces. They expressed their appreciation and gratitude to Darulfatwa for organizing such a successful and comprehensive virtual congregation.

We ask Allah the Al-Mighty to bring us back this memory with security and safety.

The Importance of Acquiring the Islamic Knowledge – Coming out of COVID-19 Lock-downs, Lecture in Adana, Turkey