Visiting the Grave of the Prophet, sallallahu ^alayhi wa sallam 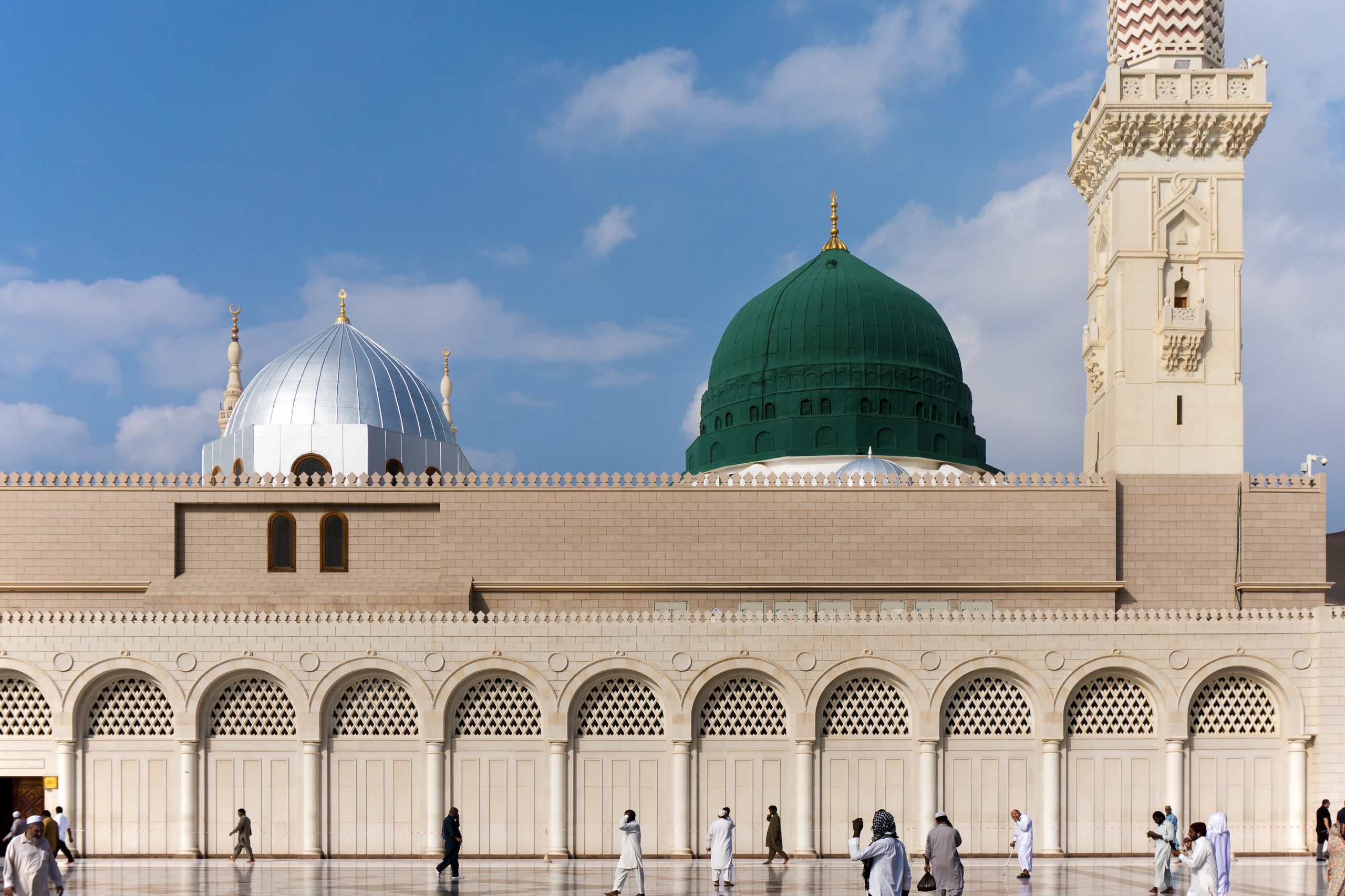 There is consensus among the scholars that it is sunnah to visit the grave of the Prophet, Sallallahu ^alayhi wa sallam, both for he who lives in al-Madinah and he who travels there for the express purpose of visiting the Prophet’s grave, and doing so is a great act of obedience. It is sunnah for the visitor to also have the intention to travel to pray in the mosque of the Prophet.

Whoever travels to al-Madinah for this purpose should keep in mind the great honour of the city of al-Madinah, and that it is the best city after Makkah.

He should ask Allah to benefit him from this visit which is an act of worship.

It is sunnah to perform the purificatory bath (ghusl) before entering al-Madinah and to wear one’s cleanest clothes.

Upon entering the mosque of the Prophet, one says words in Arabic the meaning of which is the following:

I enter with the Name of Allah. Praise be to Him.
O Allah , raise the rank of Prophet Muhammad and his Al and protect his nation from that which he fears for them.
O Allah, forgive my sins.
Open for me the Gates of Your Mercy (Guide me to the ways in which I may earn Your Mercy).
One enters the mosque with one’s right foot and exits with one’s left. One enters the mosque with the intention to go to the Rawdah (The Rawdah is the area between the grave of the Prophet, Sallallahu u ^alayhi wa sallam, and his pulpit (mimbar) and pray Tahiyyatul-Masjid there next to the mimbar.

Then, one moves to the grave of the Prophet and stands in front of it, about four cubits away from it, facing it, with one’s back to the Qiblah.

Standing there, one looks to the ground, without thinking about the worldly matters, having one’s heart full with love and respect for the Prophet, who is buried there.

May Allah reward you for what you did for us with the best reward that He ever gave a prophet or messenger for what he did for his nation.

May Allah raise your rank every time a person remembers to mention you and every time another forgets to do so, because his mind is occupied with other matters.

May Allah raise your rank in the best, most perfect, and greatest way Allah raised the rank of anyone among the entire creation.

I bear witness that no one is God except Allah, without any partner with Him.

I bear witness that you are the slave of Allah and His Messenger and the best among His creations.

I bear witness that you conveyed the Message and you fulfilled the trust with which Allah ordered you. And you truly advised your nation for the good matters.
And you performed jihad in the best way.

O Allah , give Prophet Muhammad a high status, and give him a great merit, and enable him to intercede for the people on the Day of Judgment as You promised him. Give him the ultimate (among the good things) of what a person may ask You.

O Allah, raise the rank of Prophet Muhammad, Your slave and Your Messenger; the Ummiyy (Ummiyy means the one who does not read or write) Prophet.

[O Allah, bless Muhammad, the Ummiyy Prophet, his Al, wives, and descendants,] like you blessed Ibrahim and the Al of Ibrahim.
You are the One Who deserves to be praised for all the endowments You give. You are the Great, the Glorified and the Praised One.

The one who does not to memorize all this du^a’, or does not have time to say all of it can merely say “As-salamu ^alayka, ya Rasul-Allah .”
One should not leave that place without at least saying this.

Then, one moves one cubit to the right to say salam to Abu Bakr, saying words in Arabic the meaning of which is the following :
As-salamu ^alayka, O Abu Bakr, the one chosen by the Prophet, and the other person who was with him in the cave.

May Allah reward you with a high reward for what you did for the nation of the Prophet.

Then, one moves again to the right one cubit, and says salam to our Master ^Umar, saying words in Arabic the meaning of which is the following:

As-salamu ^alayka, O ^Umar, the one by whom Allah strengthened Islam.
May Allah reward you with a high reward for what you did for the nation of the Prophet.

Then, one returns to the place where one first stood in front of the grave of the Prophet and makes tawassul (To make tawassul means to ask Allah for good things by the Prophet, Sallallahu u ^alayhi wa sallam) by the Prophet, asking Allah for what one wishes (by the status of) the Prophet.

Then, one turns to face the Qiblah and makes du^a’ for oneself and for whomever one wishes.

In the end we ask Allah  the merciful to raise the rank of Prophet Muhammad and protect his nation from that which he fears for it.
May Allah  grant us the ability to perform the pilgrimage and ^umrah and the privilege of being able to visit Prophet Muhammad at his grave.

How can I Perform ^Umrah?

Who is Obligated to Perform Hajj