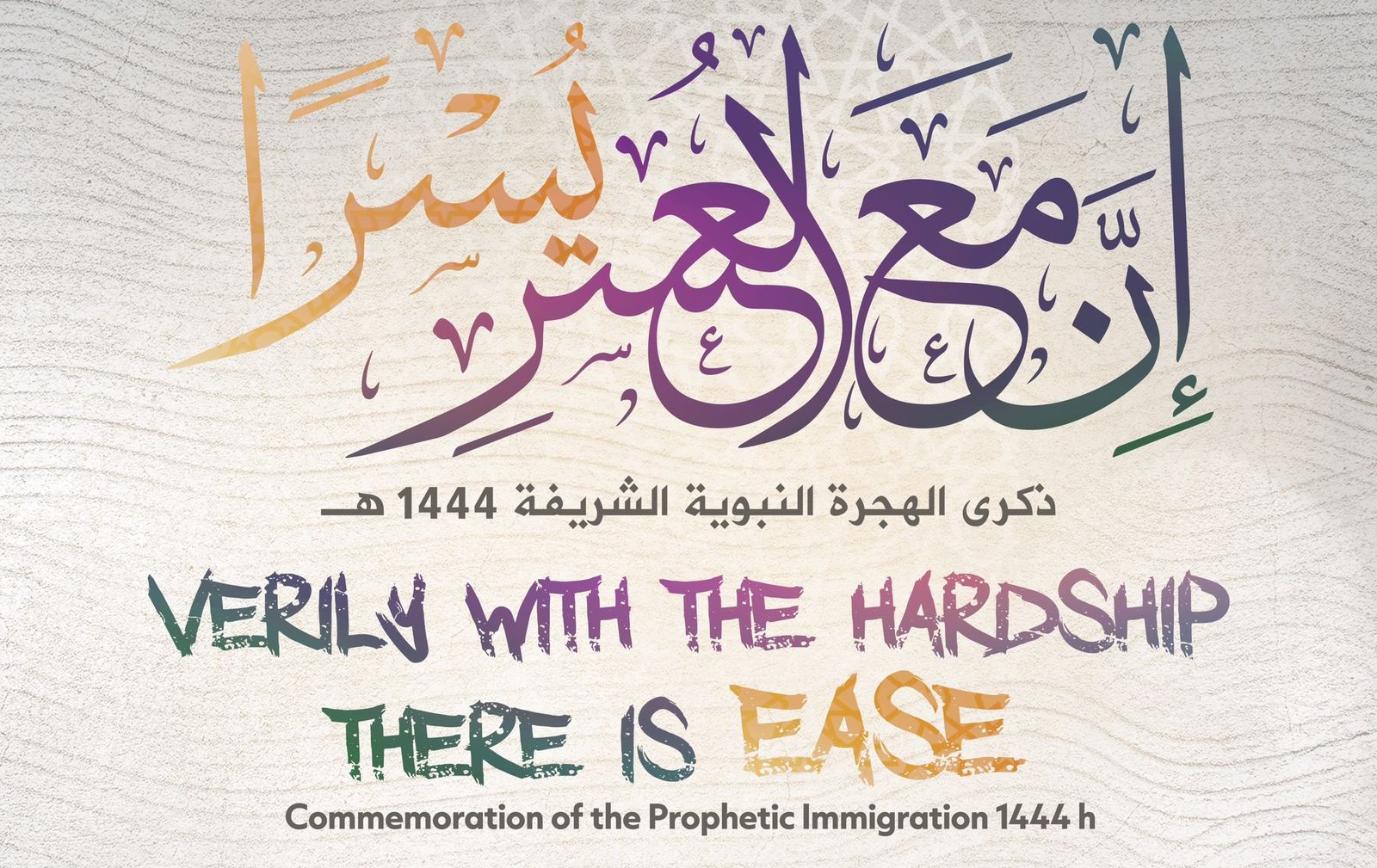 We start with the name of Allah. We praise Allah and thank Him for the blessings of Islam. We humbly ask Allah to raise the rank of our Prophet sallallahu ^alayhi wa sallam, and his kind Al and Companions and to protect his nation from what he fears for it. We ask Allah to grant us the pure intention, the proper comprehension, and the reward in the Hereafter.

This means: “When you did not support him, Allah indeed supported him when the blasphemers harassed him. He was one of two (the Prophet and Abu-Bakr), while they were in the cave he said to his companion: ‘Do not be sad, Allah is protecting us”.

The immigration of Prophet Muhammad, otherwise known as the Hijrah, was not about running away from being killed, nor was it about a cowardice fear, nor a retreat from bidding the lawful or forbidding the unlawful. The Hijrah was done in obedience to the order of Allah the Exalted. It came with great risks of death and great miracles to diffuse the risks, as signs of the support of Allah the Exalted to His chosen prophet.

In Makkah, during the Hajj season, when the people would gather, the Prophet peace be upon him used to call them to Islam and say to them: “Say no one is God except Allah and then you will succeed”.

The Makkan people consisted of many tribes, some of them very strong, powerful and influential.  After some time, they became so frustrated by the call of Prophet Muhammad to Islam, that one day their elders came to his uncle Abu Talib and said:

“What does your nephew want out of his call to Islam?  If he wants status we shall give it to him and we will not do anything without his consultation. If he wants money, we will collect it for him until he becomes the richest amongst us. If he wants to rule us, we shall give him the position of king”.

When his uncle relayed this message to Prophet Muhammad, he (peace be upon him) replied: “If they were to place the sun in my right hand and the moon in my left, I shall not leave the call to Islam, and I shall continue to spread Islam until Allah gives it victory or I die for it.”

Most of the non-believers of Makkah were arrogant and stubborn, refusing to listen or accept the truth. Years passed and the powerful and stubborn among the Makkans became even more intimidated and threatened by Prophet Muhammad’s succeeding call to Islam.

They started to inflict much hardship and torment upon the Prophet and those who believed in him, to silence them. But the Prophet and his companions tolerated the torture of the non-believers and persevered without aggression or retaliation.

Some of the companions were whipped, others were beaten, imprisoned, burnt and some even executed. The arrogant Makkans boycotted the Prophet and his companions. This also meant that they could not access food supplies, which resulted in their starvation and the death of some Muslims.

While remaining firm in their belief in Allah and His Messenger, the Muslims asked the Prophet if they could immigrate to Madinah for relief. Up to that time, some of those who had embraced Islam had come from Madinah to Makkah, attracted by the message of Prophet Muhammad ﷺ.

The Prophet allowed them to return to Madinah and others to immigrate. Group after group, they left Makkah to settle in Madinah. The first to emigrate from Makkah was Aba Salamah, the milk sibling of the Prophetﷺ. Others say the first was Mus^ab Ibnu ^Umayr.

The Muslims who immigrated to Madinah relayed everything they had learnt about Islam from the Prophet to the people of Madinah. They readily accepted the truth and the number of Muslims began to grow rapidly.

Meanwhile, in Makkah the only believers left were the Prophetﷺ, his companions Abu Bakr and ^Aliyy and others who were imprisoned or ill. Abu Bakr started asking the Prophet if he too could leave for Madinah. The Prophet kept replying, “don’t be hasty, perhaps Allah will grant you a good friend to travel with”.

The blasphemers of Quraysh (which is a prominent tribe of Makkah) noticed the continuous immigration of the Companions to Madinah. They suspected that the Prophet would soon leave Makkah for Madinah to pursue the call of Islam. In their attempt to stop this, they plotted against him.

They held a meeting in Dar an-Nadwah and unanimously agreed to kill Prophet Muhammad ﷺ. In order to avoid a clan or tribal revenge, they plotted to form an assassination squad comprising one man from every tribe. The assassins would then enter the Prophet’s house simultaneously, kill him and then distribute his blood amongst themselves to take it back to their tribes.

This would make revenge difficult because the Prophet’s family would then need to take on all the tribes, to seek revenge.

Angel Jibril, peace be upon him, descended and informed Prophet Muhammad ﷺ about the ploy of the people of Quraysh and ordered the Prophet not to sleep where he usually sleeps. Jibril also relayed to the Prophet, the order of Allah to migrate.

Adhering to the warning and to the order of Allah, the Prophet instructed his cousin ^Aliyy Ibn Abi Talib to sleep in his spot and to cover himself with his green shawl. ^Aliyy obeyed. The blasphemers had already gathered outside the Prophet’s house as planned, waiting for the right time to pounce.

The first of a series of miracles surrounding the Hijrah and in support of the Prophet became apparent. The Messenger of Allah walked out of his house at night, took a handful of soil and sprinkled some soil on the head of every assassin, as he recited verses from Surat Yasin:

Thus, Allah concealed their sight and they did not hear or see the Prophet pass before them. In the morning they went into the Prophet’s house to kill him but instead, they found ^Aliyy.

They erupted in fury as they realised the humiliation and embarrassment upon them, especially when they felt the soil run down their head. Angry and restless, they left the Prophet’s house tailing his tracks.

The Prophet had been calling the people to Islam in Makkah for 13 years when he received the order from Allah to immigrate to Madinah.

Miraculous events during the migration prevailed as signs of victory from Allah. The soil on the heads of the non-believers was just the beginning. Others include the fast-growing tree, the two pigeons, the spider web and the sinking horse of Suraqah, who was still a non-believer at the time.

A Tree, Two Pigeons and the Spider

Prophet Muhammad ﷺ and Abu-Bakr, may Allah raise his rank left Makkah calmly and safely. On their way to Madinah, they reached the cave of Thawr, and entered it to be out of sight for a while.  Allah ordered a tree to grow at the opening of the cave to cover it. Also, two wild pigeons were ordered to sit in front of the cave.

One of them laid eggs. As well, by the Will of Allah, a spider wove a web at the cave’s opening.  When the disbelievers of Quraysh arrived at the cave gripping their staffs and swords firmly, they stood by the cave and looked around. They saw the pigeons with their eggs and the spider web.

Allah the Exalted saved them from the tyrants by fragile and weak creatures.

The Sinking of Suraqah’s Horse – another miracle

Quraysh assigned a great amount of money as a bounty to whoever captures Prophet Muhammad ﷺ and his companion. Suraqah Ibn Ju^shum was blinded by greed. He kept tailing the tracks of the migrating Prophet and his companion until he was merely a spear distance away from them. The Prophet and Abu-Bakr saw him. Abu-Bakr feared for the life of the Prophet, but the Prophet comforted him and said calmly: “Allah is supporting us”.

They then both witnessed as the legs of Suraqah’s horse started sinking in the sand until its stomach touched the surface, while he was still on horseback. Suraqah became terrified and realized that what was happening was a miracle to protect a great prophet.

He asked the Prophet to supplicate to Allah to enable the horse’s legs to stand on the solid surface again. Suraqah promised the Prophet that he would turn back and will divert the men of Quraysh who were coming after him, away from their path.

The Prophet did so and Suraqah fled in shock. He embraced Islam eight years after that great miraculous event. Indeed, the Prophet and his companion were saved by the Will of Allah and His Destining.

The Arrival to al-Madinah – a glorious page in history

Meanwhile, the believers were waiting patiently in Madinah for the arrival of their beloved Prophet to their land. Some would go to the outskirts of Madinah every day seeking his arrival. Others would climb trees to see if they could see him coming in the distance.

One very warm day when the sun was at its zenith, the believers of Madinah (also known as the Ansar) were at the outskirts of Madinah again seeking the arrival of the Prophet.

Suddenly one of them yelled loudly: “The one you have been waiting for has arrived”.  Hundreds rushed out enthusiastically, to welcome and greet their master, Prophet Muhammad ﷺ, as they chanted words of praise and glory.

The believers welcomed the Messenger of Allah and his companion Abu Bakr, in great joy and happiness. It was a pivotal time in history for the religion of Islam and the City of Yathrib, which then became known as the illuminating City, i.e., Al-Madinah.

It marked the end to an era of suffering endured by the Prophetﷺ and his companions, and an end to oppression. It was the dawn of a bright and glorious era for the call of Islam.

The events of the honourable migration also teach us great lessons about endurance, patience, true reliance on Allah the Exalted, and unity. Prophet Muhammad ﷺ bonded the believers who became like one man with one heart, clear of any greed or envy.

After the immigration, many remarkable and historical events and revelations took place. They include:

In al-Madinah, the call to Islam was amazingly thrust forward with the leadership and teachings of the Prophet. Prophet Muhammad ﷺ entrenched the boundaries of truth and justice to destroy the forces of injustice, evil, and corruption. Allah the Exalted bestowed His endowments and blessings upon His Prophet and his Companions.

Nonetheless, Prophet Muhammad still had his eyes set on Makkah, his birthplace. After a long struggle and a series of confrontations with the arrogant people of Makkah, Allah enabled the Prophet and his companions to enter Makkah as victors. This victory opened the way for people to embrace Islam in larger numbers and groups. Hence, Allah revealed Surat An-Nasr of the Quran:

This means: When the support of Allah comes, and you see people embrace Islam in large groups; glorify and praise your Lord and ask for His forgiveness. Verily, He is the One who accepts the repentance and forgives.

The Hijri New Year-Lessons of Non-Aggression