The Best Ten Days of The Year -Thil-Hijjah 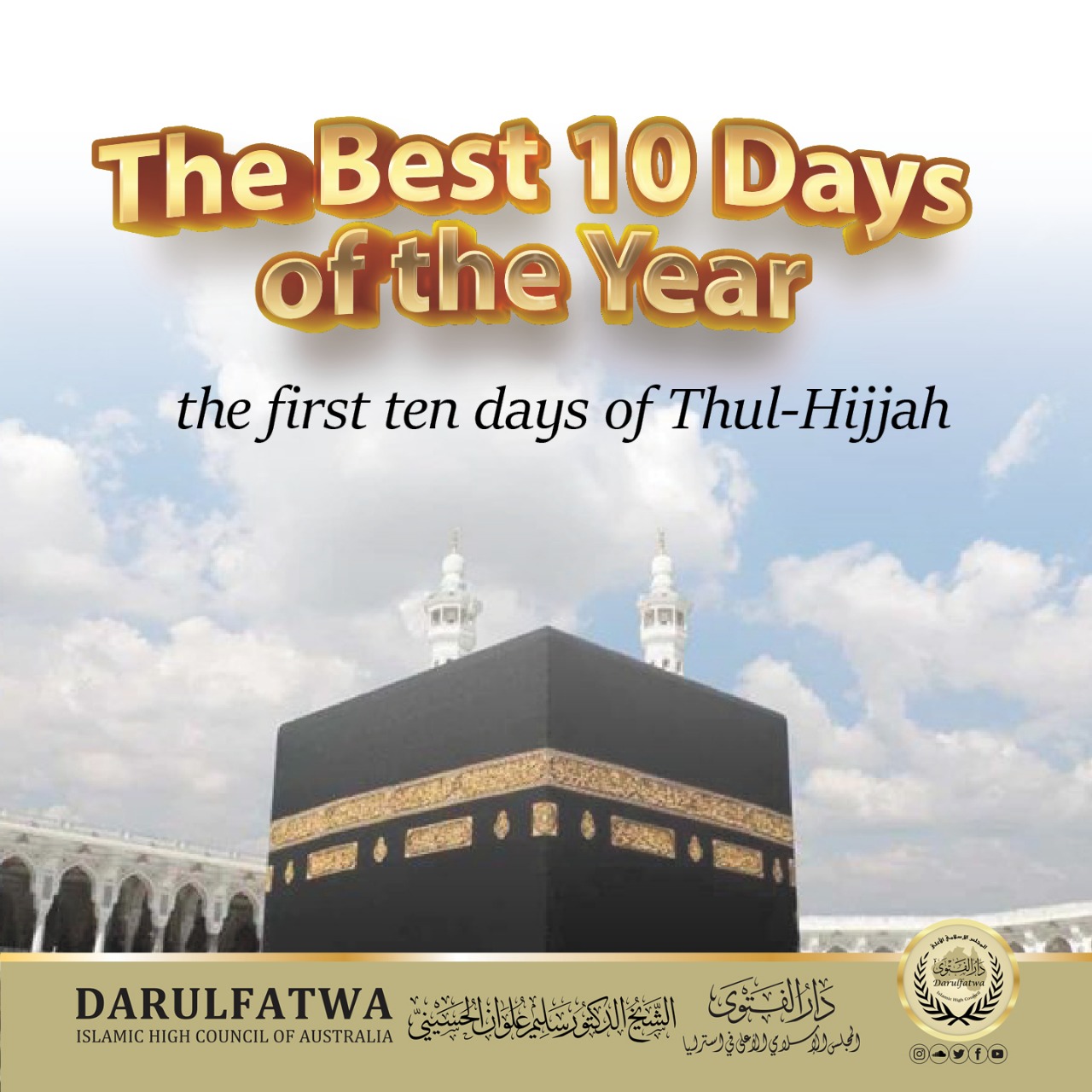 Praise be to Allah, and may Allah raise the rank of Prophet Muhammad, his Al and Companions, and protect his nation from that which he fears for it.

{There are no days on which a good deed is more accepted and rewarded by Allah than on these days, i.e., the ten days of Thul Hijjah.

Also, in Sunan Ad-Darimiyy by the route of Ibn ^Abbas who said that the Prophet, sallallahu ^alayhi wa sallam, said:

{No good deed is more meritorious and more rewarded by Allah than a good deed done in the ten days of Al-Adha. It was asked: Not even al-jihad for the sake of Allah the Exalted?

He replied: ‘Not even al-Jihad for the sake of Allah the Exalted, except for a man who went to battle sacrificing his self and wealth and returned with none of it}.

These hadiths illustrate that the good deed done in the first ten days of Thul-Hijjah, known as the days of Al-Adha, are rewarded by Allah more so than good deeds done on any other days, without exception.

Also, for many of the minor sunnah deeds, if they are done on those ten days, they will be higher in merit and reward than some major sunnah deeds done on other days of the year.

Nonetheless, most acts of goodness and benevolence performed in the ten days carry more weight than when done on other days of the year.

Many Hadiths and narrations have been related and mentioned in recommending fasting those days and doing night prayers during those nights.

The Hadith known as Hadith Jabir mentioned in the Sahih of Abi ^Awana and Ibn Hiban, it is related that the Prophet peace be upon him said:

{No days are higher in merit to Allah than those days of Thul Hijjah (i.e., The first ten days)}

Among the Virtues of the Ten Days of Thil-Hijjah:

Allah swore by it in a general sense and as well specifically. He the Exalted said:

This means: I swear by the virtue of dawn and the ten Nights.

The ten nights refers to the first ten nights of Thul-Hijjah. This is the meaning confirmed by most of the explainers of the Qur’an whether from the predecessors (salaf) or others, and it is what was narrated as confirmed by Ibn ^Abbas.

It was narrated by Imam Ahmad, An-Nasa’iyy, Al-Bazzaar, Ibn Jarir, Ibn Al-Munthir, Ibn Mardawayh, and Al-Hakim, and deemed as sahih by Al-Bayhaqiyy in the book Shu’ab Al-Iman by the route of Jaber that the Prophet ﷺ said:

^Abdur-Razzak narrated as mentioned in ‘Al-Musannaf’ that Mujahid said: “No good deed done on any day of the year is higher in merit than a good deed done during the first ten of Thul-Hijjah and they are the extra ten days that Allah granted Moussa peace be upon him.

And of its virtues is that it is the last of the sacred months; the month of Al-Hajj, about which Allah said in Surat Al-Baqara, ayah 197:

This means: The Hajj season is in specific months. They are Shawwal, Thul-Qa^da, and the ten days of Thul-Hijjah.

Also of its virtues is that it is on these specific days that Allah revealed the rules about the slaughter of cattle. Allah the Exalted said in Surat Al-Hajj, ayah 28:

This means: Let them witness the benefits befalling them and let them remember to mention the name of Allah during those specific days for having benefited from the cattle animals.

The majority of scholars agree that the ‘specific days’ are the first ten days of Thul-Hijjah; of them are Ibn Omar, Ibn ^Abbas, Al-Hasan, ^Ataa, Mujahid, ^Akramah, Qatadah, and An-Nakhaii, and it is the saying of Abi-Hanifah, Ash-Shafi^iy, and Ahmad in what is most known of him.

Exclusive to the ten days of Thul-Hijjah is that it is the time of driving the lambs to the prescribed sacrifice (slaughter) by which the merits of Al-Hajj are concluded, followed by a feast upon their meat on the last of the ten days, which is the day of slaughter (Yawm an-Nahr).

Also, it is best to drive the cattle from the Miqat (place of intention for Hajj and Ihram), to inspire and motivate others to follow suit (motivating others occurs by dangling something from the neck or foot of the animal so it is identified as being driven to the slaughter)
while in Ihram and while reciting the Talbiyah, which is a form of praising Allah, customary in those specific days.

As for the Muslims around the world who are not performing Hajj, they participate during the time of Hajj (the pilgrim) in the ten days of Thil-Hijjah by making Thikr and preparing the cattle.
During those ten days, the cattle for slaughtering are counted and prepared as the people of the season drive them to the slaughter.

Let the one who enters the ten days and wishes to sacrifice, not take away a thing of its hair or nails, as narrated by Ummu-Salamah from the Prophet ﷺ. Muslim (the scholar of hadith) narrated this hadith and it was accepted by Al-Shafi^iyy, Ahmad, and by a majority of the scholars of hadith.

The complete hadith from Ummu-Salamah is that the Prophet Sallallahu ^alayhi wa Sallam said:

{If you see the crescent of Thil-Hijjah and one of you wishes to sacrifice (slaughter cattle) then let him not take any of his hair and nails}.

As for their participation in al-Thikr in those specific days, it is in line with the preferred deed in that it is recommended for all people to increase in praising Allah and more so in those ten days.

For, in the book Al-Musnad by Ahmad In Hanbal through the route of Ibn ^Omar, it is narrated that the Prophet sallallahu ^alayhi wa sallam, said:

{There are no days on which the good deed is greater in merit and more rewarded by Allah than on those ten days, therefore do more of Tahlil, Takbeer, and Tahmeed}.

Also, Ibn ^Omar and Abu Hurayrah used to go to the market in the ten days and perform the takbeer and by their takbeer people followed and performed takbeers.

The Prophet encouraged Muslims to slaughter on ^Idul-Adha Day

How to Perform a Valid Udhiyah (Qurban Sacrifice)