Home » Tabarruk: Seeking Blessings (Barakah) from the Traces of the Prophet

Tabarruk: Seeking Blessings (Barakah) from the Traces of the Prophet 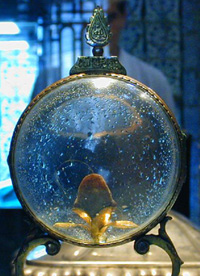 Praise be to Allah, the Lord of the worlds. May Allah raise the rank of our master Muhammad and his Al and Companions and protect his nation from that which he fears for it. Thereafter:

Narrations from al-Bukhariyy and Muslim confirm that during the last Pilgrimage performed by the Prophet (Hijjat-ul- Wada^), the Prophet distributed his shorn hair. The Prophet threw the pebbles at Jamrat-ul-^Aqabah, slaughtered a sheep and distributed its meat among the poor, then shaved his head. He shaved the right side of his head and gave his hair to Abu Talhah al-Ansariyy; then he shaved the left side of his head, gave the hair to Abu Talhah, and told him to distribute it among the people. Some received one hair, others two, and so on.

At-Tabaraniyy and Imam Ahmad narrated from the route of Ibn Hadhyam that he went with his grandfather, Hadhyam, to the Prophet. Hadhyam said to the Messenger of Allah: “I have sons and grandsons, some of whom are pubescent and others still children.” Motioning to the young child next to him, he said: “This is the youngest.” The Prophet brought this young child whose name was Handhalah next to him, wiped on his head, and told him, “Barakallahu fik,” which means: ‘May Allah bless you.’ After that, people started to bring Handhalah a person with a swollen face or a sheep with a swollen udder. Handhalah would place his hand on that part of his head the Prophet wiped, then touch the swollen part and say “Bismillah,” and the swelling would be cured.

Ibn Abi Shaybah narrated with a sahih chain as judged by IbnHajar al-^Asqalaniyy that it was the practice of the Companions in the masjid of the Prophet (Masjid an-Nabiyy) to place their hands on the knob of the hand rail (rummanah) of the platform (minbar) where the Prophet used to place his hand. There they would supplicate (make du^a) to Allah hoping Allah would answer their supplication because they were placing their hands where the Prophet placed his while making their supplication. This practice of the Companions clarifies two matters. The first is the permissibility of asking Allah for things by the Prophet (tawassul) after his death since by their act the Companions were truly making tawassul. Likewise it is permissible to ask Allah for things by other pious Muslims. The second is the permissibility of seeking blessings (barakah) from the traces of the Prophet.

(Abu Ayub was one of the greatest Companions of the Prophet. He never neglected performing jihad–even as an old man. He went with one of the Muslim armies at the time of Mu^awiyyah to liberate Constantinople. Despite his advanced age, he was patient on the hardship of the journey from Madinah to surround Constantinople–where he eventually died. Prior to his death, he asked the Muslims to advance as far as possible and bury him in that spot–which they did. The Muslim army that time was not successful in liberating Constantinople, and it remained in the hands of the kuffar who themselves tended the grave of Abu Ayyub because of the barakah they saw there! After several hundred years, Constantinople was liberated by Muhammad al-Fatih, the Ottoman. He wanted to know the location of the grave of Abu Ayyub which was no longer apparent since so many years had passed. Muhammad al Fatih asked one of the pious shaykhs in his army if he knew the location of Abu Ayyub’s grave. He answered Muhammad al Fatih by recalling a light he had seen the previous evening coming from a specific location which went all the way up in the sky. The shaykh suggested digging there might present the grave. They dug in that location until they uncovered a plate with a writing indicating this was the grave of Abu Ayub. Muhammad al Fatih built a mosque (masjid) in that location that still exists until today in Istanbul, Turkey. There is a great feeling of barakah and tranquility there). Abu Ayyub al-Ansariyy replied, “Yes, I know what I am doing. I came here for the Messenger of Allah–not for the stone.” By this he meant he was seeking the blessings from the presence of the Prophet, not for the stone covering his grave. Abu Ayyub al-Ansariyy continued his response with what he heard the Messenger of Allah say: “Do not cry over the Religion of Islam if the rulers are ruling correctly. Rather, cry over this Religion if the rulers are ruling incorrectly.” By his response, Abu Ayyub was telling MarwanIbn al-Hakam: “You are not one of those rulers who are correctly ruling by the rules of Islam.”

Considering the actions of Abu Ayyub, should one regard the statements of Ibn Taymiyah (Ibn Taymiyah is a man who lived during the 8th century Hijriyy. He claimed that Allah is a body and has limits, that Hellfire vanishes, and that the kind of the universe is not created by Allah, among other blasphemous claims.) who claims visiting the grave of the Prophet seeking the benefit is prohibited? Who is more knowledgeable–Ibn Taymiyah or Abu Ayyub? Abu Ayyub was a man better than a whole earth filled with people like Ibn Taymiyah. Ibn Taymiyah and his followers claim they follow the teachings of Ahmad Ibn Hanbal, yet Imam Ahmad, as well as other Imams, say the opposite of their claim.

Imam Ahmad was asked about touching and kissing the minbar of the Prophet for the blessing and about seeking the blessing by visiting the grave of the Prophet. He responded by saying: “This matter is not prohibited,” as was narrated by ^Abdullah, the son of Imam Ahmad, in his book titled Al^Ilal wa Ma^rifat ur-Rijal. Imam Ahmad also said it was a liked thing to make tawassul by the Prophet when there is drought. Furthermore, Imam Ahmad said that blessings would descend on those present in a session when the name of Safwan Ibn Sulaym (Safwan Ibn Sulaym was a pious man at the time of the salaf.) was mentioned. How can Ibn Taymiyah and his followers claim to follow the school of Imam Ahmad? Imam Ahmad is in one valley and they are in another valley altogether.

Sufficient in proving the permissibility of seeking blessings by the traces of the Prophet is the narration of al-Bayhaqiyy in his book Dala’il anNubuwwah. He narrated, with a sahih (A Sahihhadith is one of the two types of hadith that can be relied upon in deducing judgments. The other type is the hasan hadith.) chain that Khalid Ibn al-Walid lost a headgear (qalansuwah) he wore during the Battle of al-Yarmuk. He asked the people to help him find it and they searched repeatedly until it was found. They saw it was a very old qalansuwah and thought it strange that Khalid Ibn alWalid was so insistent on finding it. Khalid Ibn alWalid told them: “The Prophet performed ^Umrah and then shaved his head. I rushed with the people to get some of his hair. I got some of the hair from the front part of his head which I put in this qalansuwah. Every time I went into battle with this qalanwuwah, Allah gave me victory.”

Khalid Ibn Walid, was a great Companion who sought the blessings from the Prophet’s hair–hoping by this Allah would give him victory in his battles. He was a great, brave hero, and he never lost a battle after that. Before the battle of Yarmuk, a Roman leader named Georgeah asked Khalid Ibn al-Walid: “Did Allah descend a sword from the heaven on your Prophet who gave it to you such that every time you fight, you win? Is that why they call you ‘The Sword of Allah’?” At that, Khalid Ibn al-Walid informed him about Islam. Georgeah asked: “What does one get when one embraces your Religion?” Khalid Ibn alWalid told him: “He becomes one of us, and Allah forgives all his sins.” Then Georgeah asked: “What does one do to embrace your Religion?” and Khalid Ibn alWalid taught him the Testification of Faith (two shahadas.) Georgeah uttered the Testification of Faith, went and made ghusl, performed two rak^ah and then stood with the Muslim army. He fought in that battle until he died–and he died as a martyr.

The aforementioned stand as a few of many documented proofs showing that the Prophet, sallallahu ^alayhi wa sallam, taught there is a benefit in seeking blessings (barakah) from the traces of the Prophets and the righteously pious Muslims and in asking Allah for things by them. Also, it shows this is the methodology of the Companions, their followers, and those after them among the People of Knowledge, until our present times. Hence, those who claim what is opposite to that are definitely not on their path and are following other than their methodology.
We ask Allah humbly to guide us to the right path and to let us die as pious Muslims.

The Journey of Life Before and After