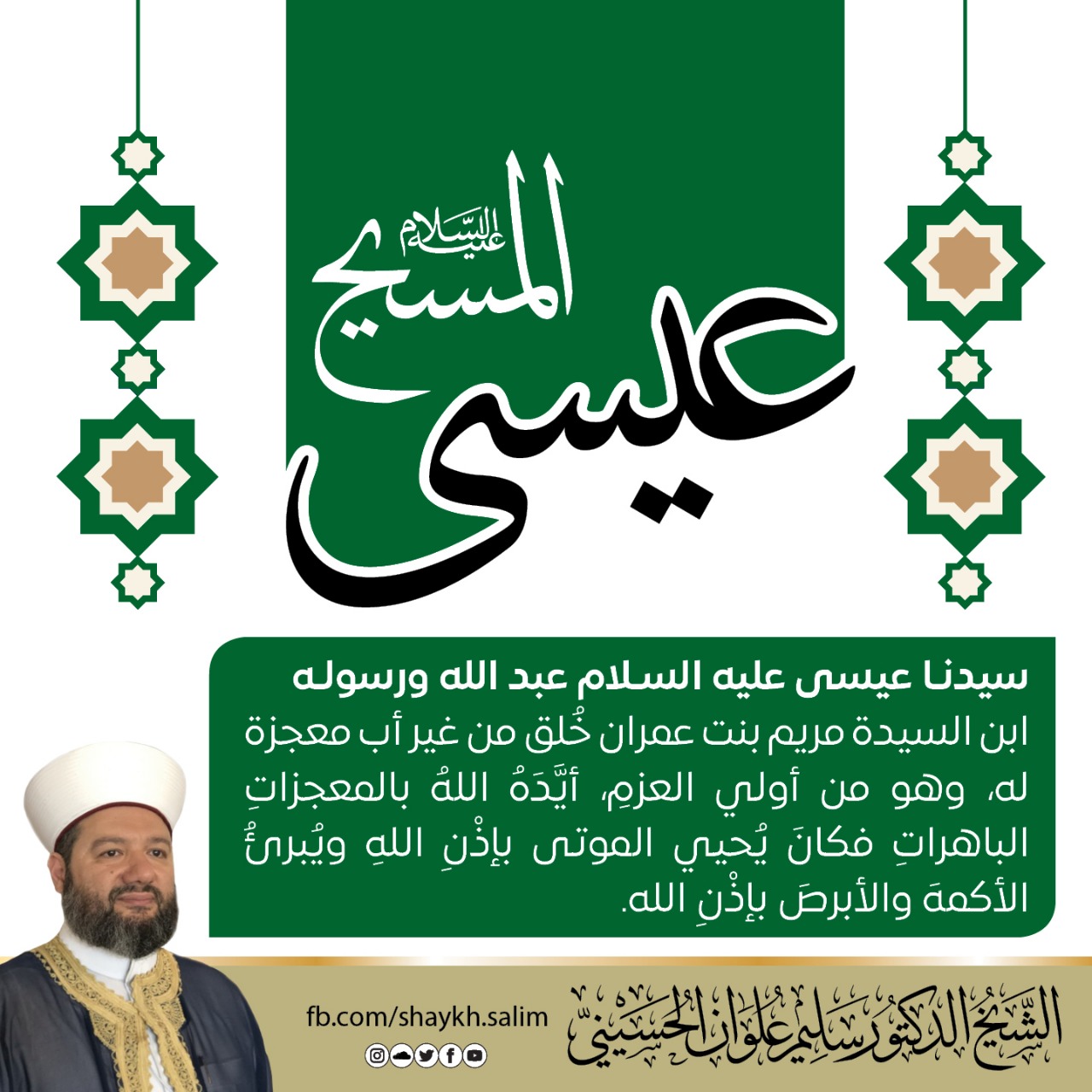 Allah sent Prophet ^Isa (Jesus) as the messenger before Prophet Muhammad. He was one of the five best messengers of Allah, called Ulul-^Azm, those with the highest status, who were the most patient. ^Isa, ^alayhis-salam was the son of Maryam, the daughter of ^Imran, from the sons of Israel.

Prophet ^Isa, as all the prophets, was truthful in what he conveyed from Allah, and although today we follow the Shari^ah of Prophet Muhammad, Muslims respect, love, and believe in ^Isa and in his prophethood.

Ibn Jarir and others narrated that one day Maryam ran out of water. She asked her cousin, Yusuf, the son of Ya^qub to go with her to get some. He declined, saying he had his sufficiency for that day, so Maryam went to fetch water alone. There, she found Jibril, whom Allah had sent to her in the shape of a man.
Thinking he was a human who might harm her, she asked refuge with Allah from him.
Jibril told her, “I am the Messenger of your Lord to you. I was sent to give you a pious child who is pure from sins.”
Maryam told him, “How would I have a son when I have no husband! I am certainly not an adulteress or a fornicator.”
Jibril told her, “Creating a son without a father is an easy matter to Allah. Allah will make him a sign to the people and an indication of the Power of Allah. He will send him as a mercy from Him and an endowment to anyone that follows him and believes in him. Creating him is a matter Allah willed and destined, so it will not be blocked or changed.”

Jibril blew the soul of ^Isa into Maryam and ^Isa’s soul entered into her womb. Maryam became pregnant with ^Isa, peace be upon him.

When the signs of her pregnancy became apparent, Maryam went away from her people. The pangs of birth led her to the trunk of a dead palm tree. Out of her shyness from the people, and fearing they would accuse her of having done something wrong, she wished she was dead and not a trace of her could be found. While in that state Jibril called to her, comforting her. He told her that Allah made a small river run under her from which she could drink, and should she shake the trunk of the dead palm tree next to her, it would turn green and moist dates would fall down for her to eat from and be nourished.

Jibril told her that if she is confronted by her people questioning her regarding her son to tell them that she made a vow not to talk to any human for that day. That day, Maryam gave birth to her son, ^Isa, peace be upon him. Forty (40) days later she carried him back to her people. They accused her of having fornicated. In response, Maryam pointed to her son, wanting the people to address him. They were angered by her gesture and thought that she was mocking them by asking them to speak with a 40-day old baby lying in a small cradle. Indeed ^Isa spoke by the will of Allah what means as mentioned in the Qur’an:

I am a slave of Allah. He will reveal the Book to me and make me a prophet and I shall be blessed wherever I am. In the rules that will be revealed to me there will be a special attention given to Prayers and Zakat. Allah predestined that I will be kind to my mother and not a tyrant with a bad ending. Peace was on me the day I was born. Peace will be on me on the day I will die and on the day I am raised alive again.

The miracle of Al-Isra’