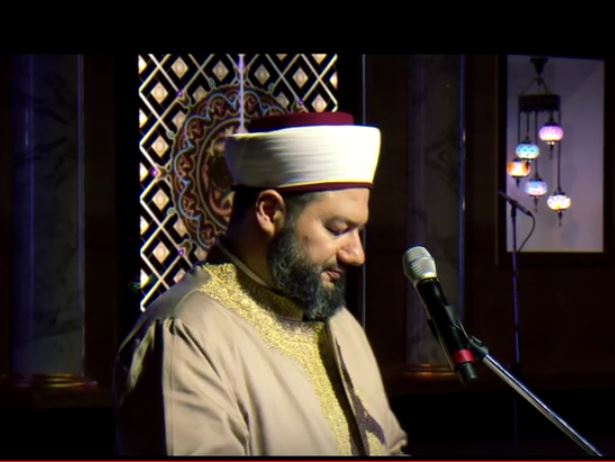 ‘Muhammad (peace be upon him) the Prophet of Mercy and the Messenger of Peace’,

All praise is due to Allah the Lord of the Worlds. May Allah raise the rank of our Master Muhammad the Prophet who did not read or write, and the rank of his brethren’s in prophethood, His Al, and his chaste and pure companions.

Thereafter, dear guests, may Allah’s peace and mercy be upon you.
Allah revealed the ayahs in the Holy Qur’an about our Master Muhammad, peace be upon him, which mean:

Allah the Exalted made this great religion a religion of justness and balance and a religion of guidance and mercy. Thus, good tidings to the one who holds tight to it and defends it.

Hence, Muslims are a nation of moderation and their belief is that of balance; centered between the radical, at one extreme, and the careless, at the other extreme.
Indeed, the balanced and pure teachings of Islam is not established from the opinions of people and their whims.

Rather, it is established from the Religious texts. Certainly, the religion of Islam and those who adhere to it with knowledge are clear of deviating away from the middle-ground. Definitely, whoever deviates from the path of balance by reverting to radical views or unconcern, does not represent Islam, but rather represents oneself.

The law (Shari^ah) of Islam calls for moderation and warns against abhorrent extremisms, which is also referred to as, ‘exaggeration’ and ‘fanaticism’ among other terms. The one who considers the scientific evidence in Islamic law will deduce with clarity that Islam denounce exaggeration. Allah mentions in the Holy Qur’an the ayah which means:

{Allah Orders for justice and goodness and for keeping ties with kins, and He [Allah] forbids the derogatory act if sinning, deviation and injustice. He warns you so you may remember.} [An-Nahl, 90]

In addition, Ahmad in his Musnad, an-Nasa’iy and ibin Majah in their Sunan and al-Hakim in his Mustadrak all narrated from the route of Ibn Abbas, may Allah raise their ranks, that the Prophet, peace be upon him said what means:

“O people, be warned of exaggerating in the religion, for what destroyed the nations before you were their exaggeration in religion.”

His phrase (peace be upon him), “Be warned of exaggerating in the Religion” is a blanket term and refers to all forms of exaggeration, be it in beliefs and in deeds. Exaggeration means to exceed the proper boundaries.

Also, in a hadith narrated by Muslim, ibin Mas^ud may Allah reward him greatly, related that the Prophet, peace be upon him, said what means:

“The extremists are doomed”.

They are the ones who exaggerate beyond reason and detrimentally exceed proper boundaries in their sayings and actions.

Dear guests, On the basis of the aforementioned, a collaboration of goodness has been formed between Darulfatwa-the Islamic High Council of Australia and Majlis Al-Ulama Jakarta Chapter, Indonesia to organize a Sydney based International Islamic Conference focusing on moderation and balance in Islam.

This Conference holds the title: ‘Muhammad (peace be upon him) the Prophet of Mercy and the Messenger of Peace’, carrying the theme: “And thus We [Allah] have made you a just nation”.

”Hence, this is the inauguration of the International Islamic Conference to be held every year hereafter and the first of its kind and scope in Australia.”

Invitations were extended to ministers of religious affairs, heads of (Ulama) scholarly councils, academics, professors, and the like in Indonesia, Malaysia, Brunei, Singapore, Thailand, Cambodia, Sri Lanka, Fiji, New Zealand, and all Australian states and territories.

The purpose of this event and of drawing such participants to it, is to confirm to the world that Muslims in general and Muslims particularly from the aforementioned countries call for moderation, balance and for a co-existence of compassion and goodness with everyone especially their counterparts in Western countries.

It is also to make the statement that Muslims reject abhorrent extremism and destructive violence and call to separate Islam from abhorrent terrorism, and Muslims from radicals.

Moreover, it is of the essence that all members of the community, in their differing capacities, positions and responsibilities, address abhorrent extremist ideologies by supporting efforts to eradicate these extremist ideologies and by assisting to expose them everywhere, as well as to assist protect the broader community with the shield of knowledge.

Thus, with knowledge we can defeat ignorance, and with moderation we can diffuse abhorrent extremism, and with balance we can guard society and with compassion, we can stand up against destructive violence.

As a final word, I would like to address the people of the participating countries, particularly Australia in saying that we, the Muslims, are each citizens of their own countries and here the Muslims are citizens of Australia.
We are of this nation and for this nation.

Therefore, we put our hands with yours to fight against extremism and its followers, at least in the countries represented here today, to assure our nations that we are helping to protect them and our lands from extremists and their destructive pathways.

May Allah guide us and you to what He accepts, and we look forward to coming together with you soon.