Home » Islamic Occasions » Mawlid » Muhammad, the one with the aggrandized manners

Muhammad, the one with the aggrandized manners 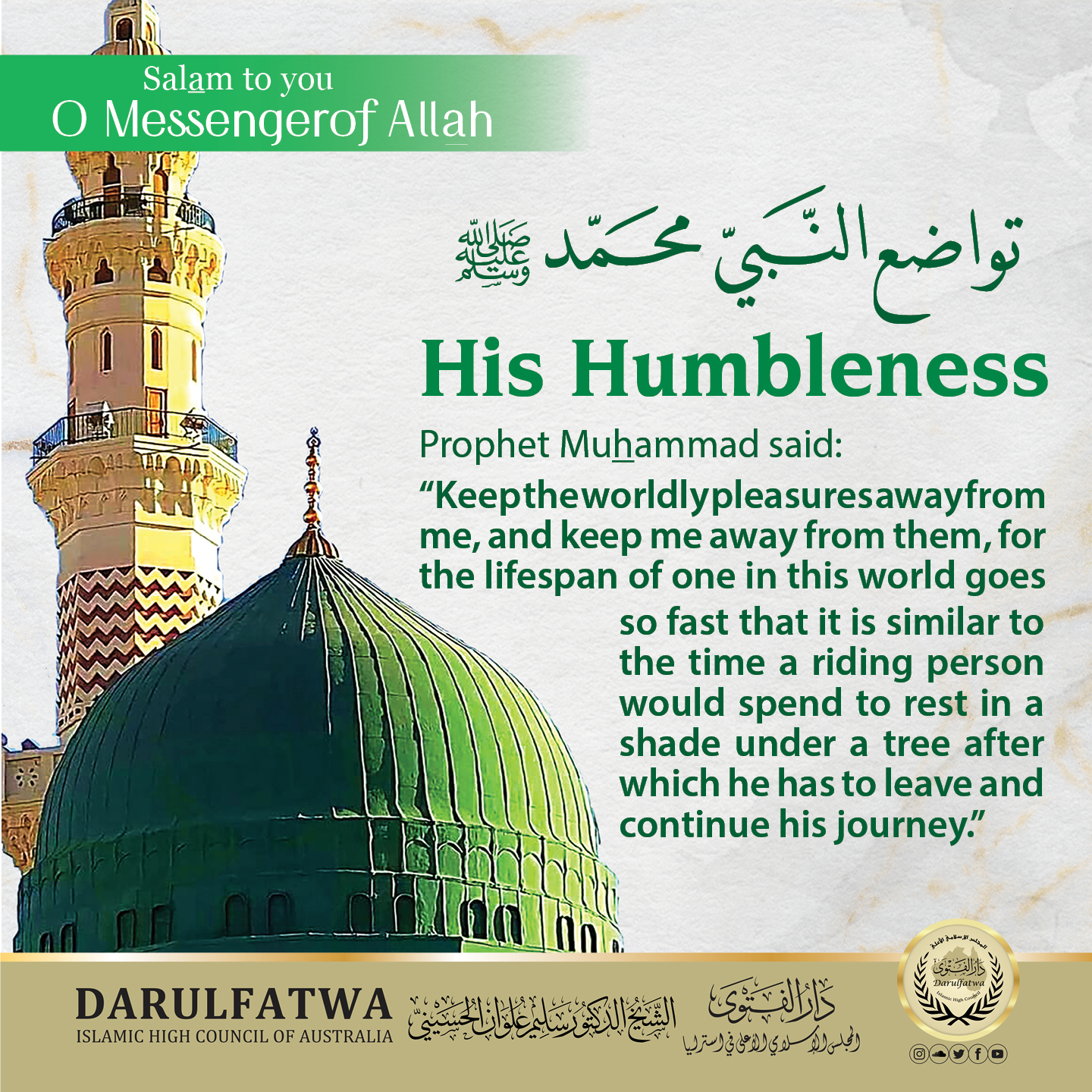 Praise be to Allaah and may Allaah increase the honour and raise the rank of our Master Muhammad Sallallahu ^alayhi wa Sallam.

On the 12th of Rabi^ ul-‘Awwal of every year, an honoured and glorified memory shines over the whole world, and is commemorated by the entire Muslim world. They celebrate the birth of the best human, our Master Muhammad sallallahu ^alayhi wa sallam.

Islamic chant (Madih) groups loudly praise the Prophet sallallahu ^alayhi wa sallam, and the poems and speeches stating his good traits and manners are made in spite of some people who have hatred towards the Messenger of Allah Sallallahu ^alayhi wa Sallam claiming that this act is not permissible. Allah said in the Honourable Qur’an:

This verse means that Muhammad was the last of the messengers and the prophets Sallallahu ^alayhi wa Sallam.

He is Muhammad, whom Allah has given manners that were all that the Qur’an ordered to do, he is Muhammad who accepts what the Honourable Qur’an calls to accept, he followed the manners and conducts that the Qur’an called for and abided by its orders. He never revenged on his own behalf unless the boundaries of the Religion were violated.
He is Muhammad whom ar-Rahman has sent as a mercy to this nation. He is Muhammad, the most courageous and brave man when confronting the enemy. He is Muhammad, who has never said “No” whenever asked to give any worldly thing which is permissible to give, only if it was something he could not find. He is Muhammad, the most truthful human when talking, the most trustworthy person, and the best human to deal with.
Allah the Exalted gave His Prophet Sallallahu ^alayhi wa Sallam the highest rank of good manners.

He used to look to the ground more than looking to the sky, which means that he used to look to the ground more than looking at the sky whenever he is silent or not talking; however, when he wanted to talk he used to direct his sight to the sky as an indication that it is the Qiblah of du^a’(direction for supplication) and the place where mercies, blessings, and Revelations descended.
He never focused his eyes in anybody’s face out of his extreme modesty and humbleness, he is Muhammad; who was the most humble human being and the most generous person to his companions; among that is that he did not use to extend his feet while sitting with people out of respect to them.
He was the most merciful person to every believer, his mercy was not restricted only to the human beings, it included other than the humans like animals and birds; to the extent that the cat would come to him and he would lower the pot making it easy for her to drink; he would do that many times for any cat that would come to him.
He is Muhammad, who used to accompany the poor, the needy, and the widow if they would come to him asking for something.

The Prophet, Sallallahu ^alayhi wa Sallam, used to joke with his Companions as a means of comforting them and showing his love towards them because of the hardships they were facing at that time. This resulted in a release of stress; however, he used to joke without violating the rules of the religion by always speaking the truth because all prophets are impeccable from lying both before and after prophethood.
He used to sit and eat with the slaves never showing superiority over them and used to say: “I’m just a slave; I eat as the slave eats, and I sit as the slave sits.”

It means: Verily, your manners are distinguished and great.

It means: His manners were all that the Qur’an ordered to do.”

On another occasion when ^A’ishah may Allah raise her rank was asked about the prophet’s manners, she said: “He was not extreme nor an extremist, he did not use to spend his time during the day in the markets talking with the purpose of collecting money. He never mistreated those who mistreated him; but rather, he used to pardon and forgive.”

As for the news about his generosity, they are plenty; among them is what Imam Muslim related from the route of Anas that he said: “The Messenger of Allah sallallahu ^alayhi wa sallam used to give anything that would benefit Islam if he was to be asked. Once a man came to him asking for some support, the Prophet sallallahu ^alayhi wa sallam gave him sheep which were grazing between two mountains. That man went to his people and said: “O people embrace Islam, for Muhammad gives as much as the one who does not fear poverty.”

As for the news about detaching himself from the worldly interests, his humility, and his efforts for the hereafter; they are many; among them is what was related by al-Bayhaqiyy, at-Tirmidhiyy, and Ibn Majah from the route of ^Abdullah; he said: The Prophet sallallahu ^alayhi wa sallam laid down on a mat, which left some marks on his skin.

So I began stroking my hand over his skin so that the marks would disappear and said: You come before my own father and mother O Messenger of Allah, would you permit us to spread something for you on the floor to sleep on that will prevent you from such marks?

He said what means: “Keep the worldly matters away from me, and keep me away from them, in this life I am just like a rider who rested in a shade under a tree and left it when departing.”

He, may Allah raise his rank, was attributed with good traits such as truthfulness, honesty, keeping ties with his kin, chastity, generosity, bravery, and obeying Allah in all instances; moments; and with every breath. This was along with splendid eloquence, complete advice, compassion and mercy, benevolence, and treating the poor; the orphans; the widows; and the weak ones kindly.

He was may Allah raise his rank, the most humble human ever to exist; he used to love the needy; attend their funerals; and visit the sick. This was besides being handsome looking with a beautiful image, and of a great lineage. Allah ta^ala said:

How can I not love Muhammad sallallahu ^alayhi wa sallam for he used to accompany the poor, the needy, and the slaves.  He regularly visited them, inquired about them, and attended their funerals.

How can I not love Muhammad sallallahu ^alayhi wa sallam whose speech was so eloquent, differentiating between truth and falsehood. He accepted what the Honourable Qur’an calls to accept; he implemented the manners and conducts that the Qur’an calls for and abided by its orders.

How can I not love Muhammad sallallahu ^alayhi wa sallam and he is the most modest and polite person, he spoke the truth decidedly due to his impeccability from lying whether in the state of satisfaction or in the state of anger; hence he said only the truth.

He used to exert a lot of effort preaching to people, and would remind them of the verses of the Qur’an which Allah revealed and would warn them from His punishment. If he were to deliver a sermon, his eyes would turn red, his voice would rise, and his anger would be stronger as if he is warning them of an army who would invade them.
When he is happy and delighted, his face would be lightened.

Muhammad is the most compassionate and merciful human, he was the most generous Arab. His courage was seen when he sent a message with his own messenger to Hercules which stunned that Roman leader.The Messenger of Allah, sallallahu ^alayhi wa sallam, said:

This means: “If anyone innovates in our Religion a matter which does not belong to it, then it is rejected.”
Hence, the deeds are not accepted unless it agrees with the rules of the Religion. One can not know the matters that agree or do not agree with the rules of the Religion without knowledge, and knowledge is to be taken only from trustworthy scholars. So it is not sufficient to just read the books without acquiring this knowledge directly from the scholars.
In fact, some people fell into perdition and consequently commit blasphemy because they did not acquire the knowledge from the scholars directly; but rather relied on merely reading books of the scholars; and the matter becomes even more dangerous when the books they are reading are full of Lies, the dispraised exaggeration in Religious matters, lying about the Religion, and likening Allah to His creations; we seek refuge with Allah from all of that.

Among these well-known books which are widespread in today’s markets in the name of Islam falsely is the book called “Mawlidul-^Arus”. In this book, and this is blasphemy to believe, it is mentioned that Allah took a handful of His face and said to it: “Be Muhammad” and so it became Muhammad.
This statement attributes to Allah ta^ala body parts and this definitely contradicts the essential of Tawhid. Allah ta^ala is clear from being attributed with organs, body parts or from being divided into things or being a part of something else. Allah said:

Which means: “Nothing was born out of Him; so no one inherits Him. He is not the origin of anything and He did not originate from anything.”

So it is impossible that He has multiples or parts or that He is divisible, Allah is clear from that, He does not resemble any of His creations in any way as He said in the Honourable Qur’an:

It means: “Nothing is like Him in anyway whatsoever and He is attributed with Hearing and Sight.”

It is important to mention here that the book “Mawlidul-^Arus” was not authored by Ibnul-Jawziyy, because Ibnul-Jawziyy is among the great top scholars of Ahlus-Sunnah wal-Jama^ah. The creed he believes in is that Allah is not a tangible body that can be touched by the hand like the trees, stones, and humans and that He is not an intangible body that cannot be touched by the hand such as light, darkness, and wind. Thus, He is not attributed with the attributes of the bodies like motion and stillness.

In this month Muslims commemorate the birth of the Master of these great prophets, our Master Muhammad Sallallahu ^alayhi wa Sallam. This great prophet came with a great law indicating what is lawful (halal) and unlawful (haram), what is obligatory (wajib) and recommended (sunnah), disliked (makruh), valid (sahih), and invalid (batil). He who learns the personal obligatory knowledge and passes it on to his parents, wife, kids, beloved ones, neighbours has earned a great deal.