Home » Immigration: The People of Yathrib Believe & Welcome the Prophet 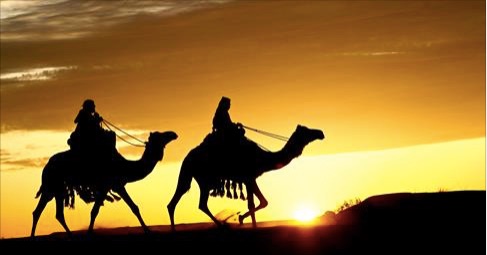 At the time of Hajj [which was done in an invalid way by the blasphemers at the time], the Prophet, peace and blessings be upon him, used to meet with the various tribes and call them to Islam.

During one of these times, he met with a group from Yathrib (Madinah). He called them to Islam, and they believed. They said to him: ”We will return to Yathrib and convey Islam to our relatives there.”

They also told him that they would meet with him the following year. When they returned to Madinah, they called the people to Islam, and some of the people there became Muslim. These were called the Ansar (Supporters).

In the following year, twelve men from the Ansar came and gave allegiance to the Prophet, sallallahu ^alayhi wa sallam. They said that they would not associate partners with God, steal, fornicate, kill their children (this was a practice during the time of ignorance, before the Prophet’s call to Islam), or disobey him.

The Prophet, peace and blessings be upon him, sent Mus^ab ibn ^Umayr to teach them religious matters. Many of the residents of Madinah became Muslim, until every single family had at least one Muslim in it.

During the next season of Hajj, around seventy of the Ansar came to Makkah and gave allegiance to the Prophet, sallallahu ^alayhi wa sallam, during the night. Then, God revealed to our Prophet that he and his followers must immigrate to Madinah.

The blasphemers of Quraysh found out about the allegiance and that the Prophet had ordered his Companions to go to Madinah. They tried to prevent Muslims from going to Madinah. So, many Muslims left secretly.

The blasphemers had a meeting and decided to kill Prophet Muhammad صلى الله عليه وسلم before he left also. Gabriel came to the Prophet, peace and blessings be upon him and told him of the blasphemers’ plan. He also told him not to sleep where he usually did.

The Prophet, sallallahu ^alayhi wa sallam, then ordered his twenty-three year old cousin ^Aliyy to sleep in his place and to cover himself with his covers. He also instructed him to return to their owners what the Prophet صلى الله عليه وسلم was safekeeping for people.

When the Prophet went out of his house, there were several young men surrounding it ready to kill him. God made the men unable to see our Prophet. Our Prophet صلى الله عليه وسلم took a handful of dirt and sprinkled it on their heads, while reciting the first nine verses of Suratu Yasin. In these verses, God tells that He made the blasphemers unable to see Prophet Muhammad صلى الله عليه وسلم.

After our Prophet, peace and blessings be upon him, left his house, he went to our Master Abu Bakr’s house and told him that he had been given permission to migrate. Abu Bakr asked the Prophet if he could accompany him and the Prophet صلى الله عليه وسلم agreed. Abu Bakr then cried out of happiness.

Then, they rode their female camels, which Abu Bakr had been preparing for the trip, until they reached the cave of Thawr, which they entered. Heading towards this cave, which was not in the direction of Madinah, was meant to throw off the enemy. A few men were secretly helping our Prophet صلى الله عليه وسلم and Abu Bakr رضي الله عنه.

A tree, which God ordered to grow in front of the cave’s entrance, concealed it. Then, two wild birds made their nest in front of the entrance. The blasphemers were following the Prophet صلى الله عليه وسلم. When they arrived at the cave, they sent a man to scout the area.

When he saw the nest and the tree, he went back and told them that there was no one in the cave. If he had only looked down at his feet, he could have seen our Prophet صلى الله عليه وسلم and Abu Bakr, but God prevented him.

When he came close to them, the Prophet صلى الله عليه وسلم made a du^a’ (supplication) against him and the legs of his horse sank into the ground. This happened three times after which Suraqah asked the Prophet to make du^a’ for him, promising he would turn back and he would not tell anyone about their location.

The Prophet صلى الله عليه وسلم made du^a’ for him and his horse returned to its original state. Suraqah returned to his people and kept his promise. About eight years later, Suraqah became Muslim.

On the way to Madinah, Abu Bakr, his slave, ^Amir ibn Fuhayrah, and the son of Urayqit, who guided them on their way, were with the Prophet, sallallahu ^alayhi wa sallam. They passed by Umm Ma^bad from the tribe of Khuza^ah, who did not know them. The Prophet صلى الله عليه وسلم said to her, ”O Umm Ma^bad, do you have milk?”

She said, ”No, by God.” He then saw a female sheep near the house and asked her about it. She said that it was an old sheep that did not produce milk anymore. The Prophet صلى الله عليه وسلم passed his hand over its back and udder.

”He was innocently bright and had a glowing countenance. His manners were refined. Neither was his belly bulging out, nor was his head deprived of hair. He had black, attractive eyes, finely arched by (almost) continuous eyebrows. His hair was black. His neck was long.

His speech was well set and free of superfluous words, as if it were a string of beads. His stature was neither too high, nor too short to look repulsive. His Companions always surrounded him.

Whenever he uttered something, his listeners would hear him with rapt attention, and whenever he issued any command, they vied with each other in carrying it out. He was a master and a commander…”

The Muslims in Madinah had heard that the Prophet صلى الله عليه وسلم was on his way to them. Every day they were on the lookout for his arrival. On the day that he arrived, they waited until the sun became too hot for them to bear and returned to their homes before he arrived.

When the Prophet and Abu Bakr arrived, just one man (a Jew) saw them coming. He shouted as loud as he could, informing the people of the Prophet’s arrival. All came out to greet him. Many people there had become Muslim and still had never met the Prophet, sallallahu ^alayhi wa sallam.

Thus, they were thrilled to see him for the first time. When the Prophet صلى الله عليه وسلم arrived, he was exactly fifty-three (53) years old, for it was the same day and month of his birth, Monday 12th of Rabi^unil-Awwal.

Their trip lasted for eight days. The Islamic calendar counts this entire year as the first year of the calendar, beginning with the month of Muharram. Hence, the year that the Prophet صلى الله عليه وسلم immigrated to Madinah is known as the first year of Hijrah (Immigration).

The ceiling was made of palm leaves and the floor was made of sand. At that time, our Prophet صلى الله عليه وسلم had two wives, Lady Sawdah and Lady ^A’ishah, who arrived in Madinah after the Prophet, along with Lady Fatimah, Lady Umm Kulthum and other close members of the household.

Lady Zaynab stayed in Makkah a while longer. It was an individual obligation for the Muslims, if able, to immigrate to Madinah. It remained an obligation until the Prophet صلى الله عليه وسلم opened Makkah about eight years later. It continues to be an obligation for Muslims to move out of a place ruled by non-Muslims if one believes that staying there will result in one committing blasphemy or sins.

Hijrahs (Immigrations) of the Muslims