Home » Eid Prayer & Recommended acts on the day of Eid

Eid Prayer & Recommended acts on the day of Eid 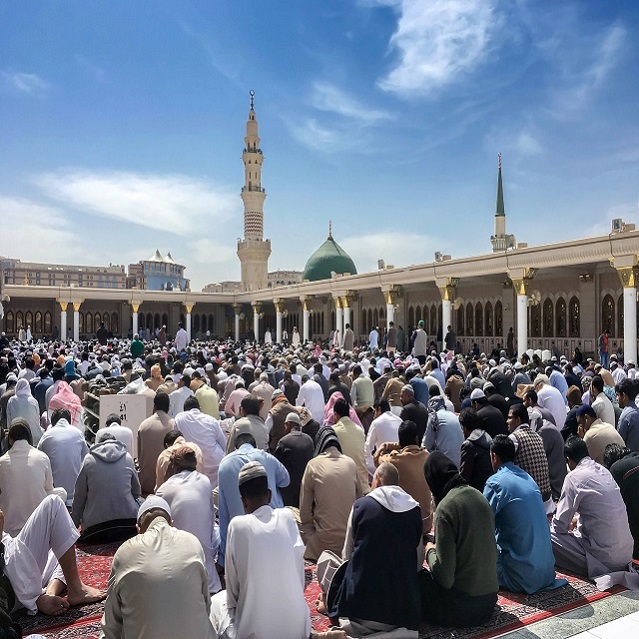 Eid prayer can be performed in congregation, or individually any time between sunrise and noon. The best time of the Eid prayer is after the sun has reached the height of a spear (approximately 20 minutes from sunrise).

However if one missed it one should make it up.The Eid prayer is not preceded by the adhan (the call to announce the prayer time) or iqamah (the call to start prayer).The one who performs the Eid prayer must satisfy the conditions and avoid the invalidators of prayer. The Eid prayer consists of two Rak^ahs.

It is initiated with the opening takbir, with the intention to perform ^Id Prayer with the Imam, followed by the opening supplication, and seven takbirs. In between each takbir of the seven takbirs one recites the following du^a’:

Then one recites al-Isti^adhah (seeking refuge with Allah from the shaytan by saying:

If one started with the Fatihah leaving out any or the entire takbirs, ones prayer is still valid, however, one would miss out on the reward of the takbirs. Hence one should continue with one’s prayer order.

After the prayer, it is recommended that the Imam delivers two speeches (same as the Friday speech) starting with nine takbirs in the first half of the khutbah and seven in the second.

The Imam should teach the people the rules of breaking the fast, visiting one’s relatives, and other significant matters pertaining to Eid.

Recommended acts on the day of Eid

It is sunnah on the day of ^Id  to have a bath before going to the prayer.
To wear perfume.
To clip one’s fingernails.
To wear the best of one’s clothes.
To take different routes to and from the ^Id prayer.
To go early to the mosque excluding the Imam.
It is sunnah to have a light snack such as dates or the like before going to the prayer.
Walking to the prayer place.
Saying takbirs of Eid is highly recommended after the sunset of the last day of Ramadan and remains until the Imam says the opening takbir of the ^Id prayer. This includes saying takbir in one’s home, the market places, mosques, and the streets.
Congratulating one another on the day of Eid is rewardable, as both Ibn Hajar and Al-Bayhaqiyy stated.
It is sunnah to spend the night preceding the day of ^Id in acts of worship such as praying or the like.Prophet Muhammad (peace be upon him) used to pray ^Id prayer consistently as it is sunnah mu’akkadah.

The first Eid prayer that the Prophet performed was in the second year after the Hijrah (migration).

Meaning of the Eid Takbirs