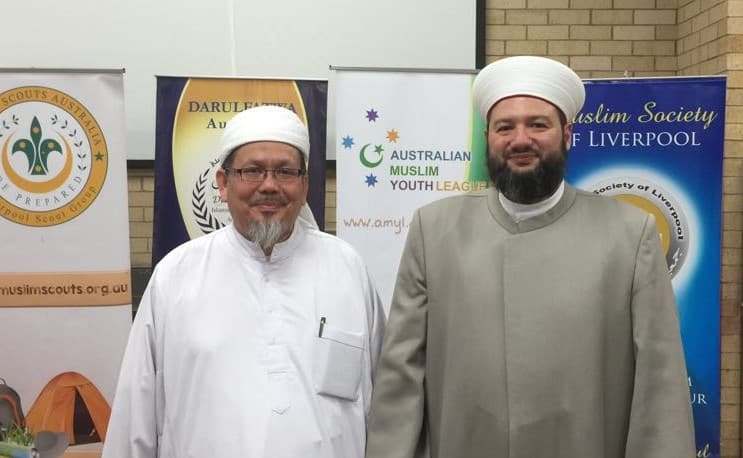 Indonesia’s Council of Scholars representative, in an inaugural visit to Australia: “Looking forward to ongoing collaboration with Darulfatwa Australia”.
During his journey of discovery to Australia, the Deputy Secretary of Indonesia’s Council of Scholars,
Mr. Thul-Qarnayn Tango Rafi^uddin, visited Darulfatwa Australia, receiving a great welcome from his eminence, Chairman Dr. Sh. Salim Alwan al-Husayni and a number of Sheikhs and Imams.
The Indonesia Council of Scholars is the highest religious authority in the country to deal with religious and educational affairs. It represents a pool of millions of members and associates, including sheikhs, scholars of Islam and dignitaries in high positions.
In a sitting at the Darulfatwa offices, the assembly of local and overseas dignitaries discussed matters relating to the course of teaching Islam and innovative research methods in collaborative efforts between the two institutes.
Further to this, Darulfatwa held a banquet in honour of the Indonesian representative, following Sunset Prayer in congregation at As-Salam Mosque in Chester Hill. The banquet hosted a number of association heads, community and political dignitaries and Sheikhs from the Australian Indonesian community.
A recitation from the Holy Qur’an and a video exhibiting the achievements and activities of the Darulfatwa Australia launched the banquet, followed by the welcoming word of his eminence Dr. Sh. Salim Alwan. The Chairman of Darulfatwa welcomed Mr. Thul-Qarnayn Tango Rafi^uddin and highlighted his outstanding merits and remarkable work in the field of teaching Islam and in aiding the fight against extremism.
He then discussed the goals of Darulfatwa and its focus on spreading pure religious knowledge, in light of global events of despair in the Islamic world. He said:
“The injection of extremist ideas into the minds of some youth is devastating and is certainly not the truth about Islam.
“We are always actively seeking to cooperate with all religious authorities in all countries in order to immunize adolescents and Islamic societies against the dangers of fragmentation and becoming lost through radicalisation”, Dr. Sh. Salim Alwan said.

Sheikh Ibrahim El-Shafei then delivered a brief word in English outlining the aims of Darulfatwa and its activities, followed by an inspiring word from the honorary guest.

Mr. Rafi^ud-Din talked about the goal of his visit to Australia, his expectation and commented on his experience.

He said his visit came after the Indonesian government officially requested him to travel to Australia to closely observe economic and religious matters of mutual interest between the two countries, focusing on issues relevant to teaching Islam and its edicts.

He stated that he was on a mission also to explore the conditions of the Muslim community in Australia, which he witnessed to be in a good state of affairs. He also praised Darulfatwa’s efforts and the efforts of its surrounding communities, especially the Indonesian.

In closing, Mr. Rafi^ud-Din promised to convey the picture he saw to his Indonesian officials and wished for continuing and prosperous collaborative works with Darulfatwa, the Islamic High Council of Australia.