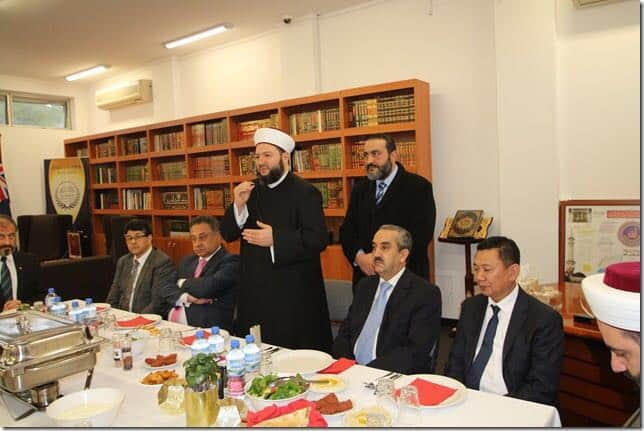 The VIP banquet served to recognize the longstanding services of the Moroccan Ambassador to the Arab and Muslim community in Australia, during his many years of residence in Canberra.

Over the years, his experience, exhaustive efforts, seniority in his diplomatic role, and his capacity to be the Amabassador to the Arab and Islamic countries, have earned him the title, Head of Arab ambassadors.

Preceding the banquet, Darulfatwa officials guided the Moroccan Ambassador on a tour of several community centers and Islamic institutions and schools affiliated with Darulfatwa in Sydney.

The tour began at Al Amanah College in Liverpool, where a number of students, teachers and administrators greeted the guests in the celebrations hall.

In the meantime, volunteers were preparing the luncheon, which hosted a number of sheikhs, imams, preachers, heads of associations, institutions, and Islamic centers and community school principals from Sydney and Melbourne; all of whom are Darulfatwa Australia affiliates.

Chairman of Darulfatwa Australia, his eminence Dr. Sheikh Salim Alwan opened the series of talks with a welcoming speech in which he thanked all the ambassadors for their attendance and visit to the Darulfatwa offices and their interest in witnessing the activities, teachings and publications of Darulfatwa in person.

He supplicated for the guests, wishing for them success in serving the Muslim and wider Australian community.

They all expressed appreciation and gratitude for the warm welcome, generous hospitality, and warm reception and planning they had experienced.

They thanked Sh. Salim Alwan for this invitation and tour program, which reflected to them a clear image of the transparent and pure approach in propagating Islam advocated by Darulfatwa Australia.

In their address, they echoed the message saying, they wish all Islamic institutions in this country would follow the example and leadership of Darulfatwa, because, they said, “it is an institute of pride and honour” and concluded by supplicating for its lasting success, Allah Willing.

Following the official talks, his Eminence Dr. Sh. Salim Alwan presented all the ambassadors with gifts and a collection of valuable books and publications of Darulfatwa Australia, before proceeding to posing for official group photos. The Historic Visit of Al-Azhar Ash-Sharif to Australia 2015